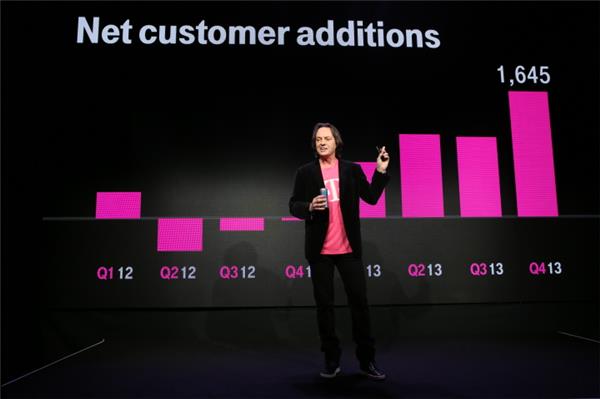 T-Mobile is hosting their press conference from Las Vegas right now and T-Mobile's CEO, John Legere has just announced their Q4 2013 earnings. And man those earnings were pretty good. Q4 was their best quarter in nearly 8 years. So if you think T-Mobile isn't gaining customers, better think again. They added over 1.6 million customers in Q4. That makes it the third consecutive quarter that they've added over a million new customers. Before John Legere took over, T-Mobile was losing customers every quarter. So it's great to see them adding new ones, and the numbers being this large.

If you look at the chart down below, you'll see that T-Mobile hasn't had large number much lately, in terms of new customers per quarter. Of those 1.6 million that T-Mobile gained, about 869k were postpaid customers and about 112,000 prepaid customers. That brings T-Mobile to over 4.4 million new customers in 2013 alone. Pretty good job for the fourth largest carrier in the US, I'd say.

This on top of the changes to Uncarrier 4.0 which includes T-Mobile paying ETF's for those looking to switch from AT&T, Sprint and Verizon. Which will give you up to $650 to switch. So this makes me think that the T-Mobile numbers are going to get even larger in 2014. Which I'm not going to complain about. Additionally, T-Mobile has finalized the deal with Verizon to buy some of the 700Mhz spectrum (A Block) which will expand their coverage to a few hundred million more people. Which is always nice to hear.

T-Mobile's press conference isn't over quite yet, so I'm sure we're going to hear even more from one of my favorite CEO's John Legere. And yes, he's already dropped a lot of S-bombs, as expected. I have to say he's one of the most entertaining CEO's out there. In fact he made his entrance to the press conference to Macklemore. Now that's pretty awesome.

How many of you are looking to switch to T-Mobile in 2014?