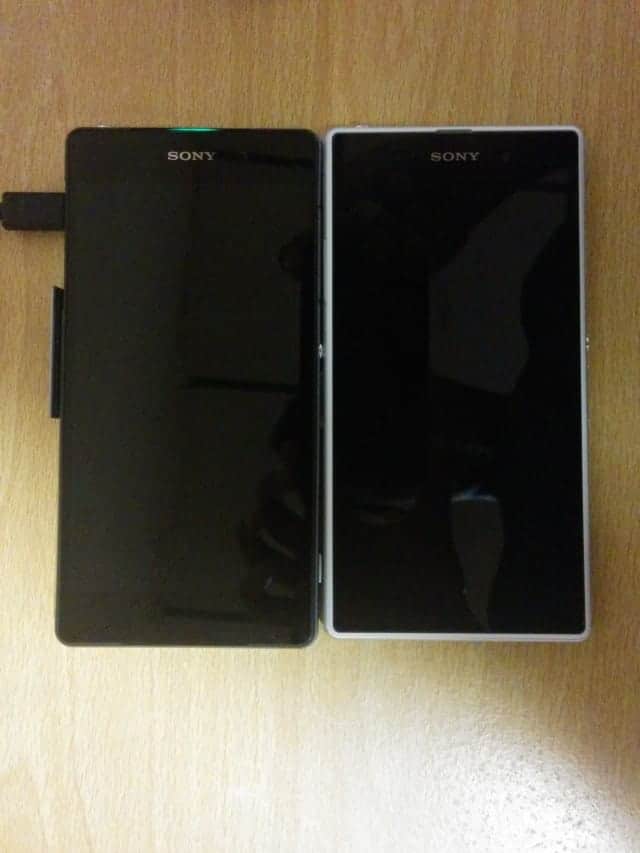 The cat is out of the bag now for Sony's Xperia Z2, and courtesy of Xperia Blog we've got a ton of information on Sony's latest up-and-coming flagship phone.  First off you might remember hearing about the Sony Sirius, which is indeed the same phone as the D6503/Xperia Z2 we've got here for you today.  It's Sony's next upgrade from the Xperia Z1 in all ways including hardware and software features, and it looks like the physical phone itself is just a little bit different from its older brother.  As you can see in the above shot the all-black phone is the Xperia Z2 and is just a hair larger than the Xperia Z1.  This is because the screen size has been bumped up to 5.2-inches, up from the 5-inches of the Xperia Z1.  You'll also notice almost no bezel on either side of the Xperia Z2's screen, which is a welcome change from many Sony phones.

In terms of thickness and weight it appears that the Xperia Z2 might just be a hair thinner than the Z1 as well, but this shot isn't necessarily scientific.  The body styling remains the same as the Xperia Z1, and the phone is water-resistant in the same manner.  There's even a mode to lock the touch screen while underwater to avoid erroneous presses due to conductivity in the water. 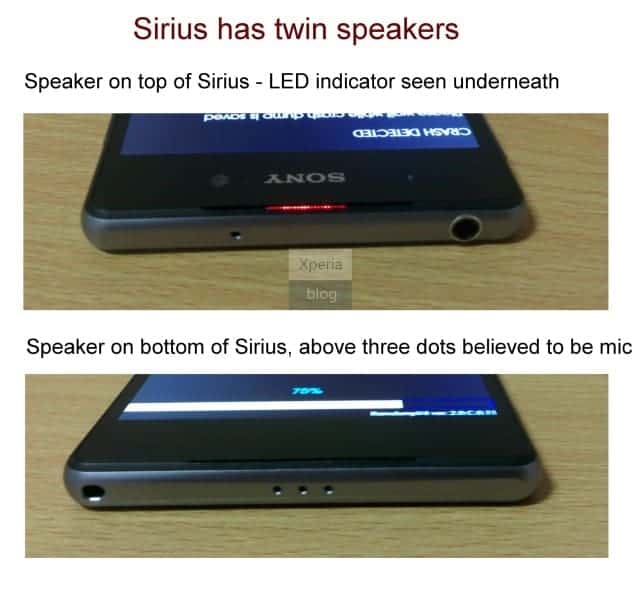 Last but not least on the hardware front is the inclusion of dual-stereo speakers in a very HTC One-like configuration of one on top of the device and one on bottom.  This is a clear indication that Sony's new flagship will be a beast when it comes to outputting some serious (Sirius) sound.  Given that it's got High Res Audio built-in to the device, we wouldn't be surprised to see Sony market its S-Force engine like HTC marketed Beats Audio with the HTC One.  There also appears to be a full bar LED indicator built into the top speaker, which is a rather sexy design if I do say so myself.  As far as specs are concerned, the water seems a little murky, as we had some rather incredible specs leaked at the beginning of this month, whereas this latest leak suggests only a minor spec bump from the Xperia Z1.  We're still seeing the same 5.2-inch display that was rumored and pictured above, but instead of being a 2K display it's apparently "just" a 1080p display.  Remember though that at this point our eyes really can't see the difference between these resolutions at this size of a screen, so in all honestly it really doesn't matter much.  Otherwise it looks like the Sirius has 3GB of RAM on board, as well as the 2.3GHz quad-core Snapdragon 800 and the awesome 20.7 megapixel rear camera.