Back at CES 2014 earlier this month, Samsung announced a ton of new tablets. Well by Samsung’s standards it wasn’t a ton. But they did announce four tablets. The Galaxy Tab Pro 8.4, 10.1, and 12.2, as well as the Galaxy Note Pro 12.2. All of which are pretty high-end devices. They feature 2560×1600 resolution displays, along with an Exynos 5 Octa processor or Qualcomm Snapdragon 800, depending on the variant (WiFi only vs LTE). All four of these tablets are due to launch this quarter and definitely won’t be cheap.

However, the Galaxy Note Pro 12.2 has just passed through the FCC, and appears to have support for Verizon’s network. The FCC documents show the model number SM-P905V which supports Verizon’s LTE bands (band 4 and 13). We’ve also already seen the Galaxy Note 10.1 2014 Edition pass through the FCC with support for Verizon’s network earlier this month. So it’s quite possible that Verizon will be launching both models on their network very soon.

Obviously, this model will feature the Qualcomm Snapdragon 800 processor inside, since the Exynos 5 Octa processors don’t support LTE. Which might be a good thing. As I think the Snapdragon is much more powerful, but it’s also more widely supported by both Qualcomm and developers. Lately we’ve seen devices like the HTC One X/X+ not getting updates past Android 4.2, which is said to be because of NVIDIA not supporting the Tegra 3 anymore. Well that likely won’t happen with the Snapdragon 800 as it’s in many, many more devices. The Galaxy Note 3, LG G2, Galaxy Note 10.1 2014 Edition, Galaxy Note Pro 12.2, Galaxy Tab 8.4, 10.1, and 12.2, just to name a few. 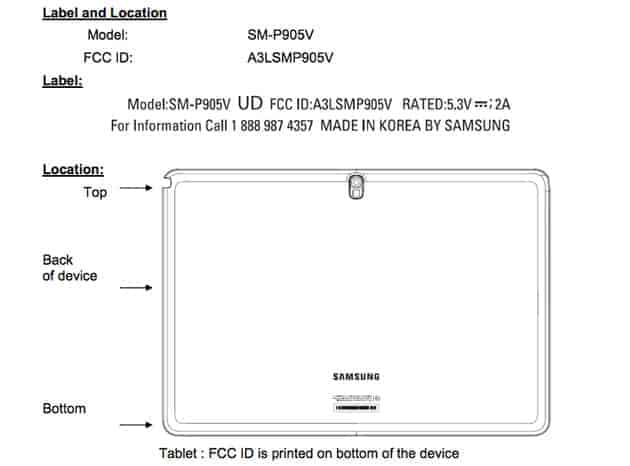