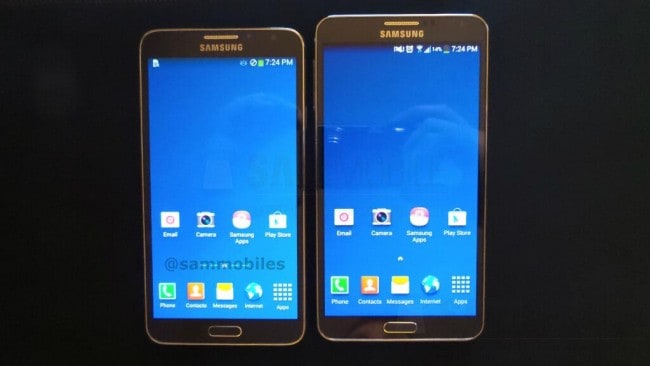 While Samsung had a lot to announce at CES 2014, with the announcements of the Galaxy Note 12.2 Pro and the Galaxy Tab Pro lineup, there seems to be no slowing down from the Korean giant. We've been hearing rumors about a Galaxy Note 3 Lite (or Neo as it's become known) and now, we finally get to see it in the flesh. Thanks to the folks over at SamMobile, we can see the Galaxy Note 3 Lite next to the original Note 3 (which is on the right). From the front, both devices look exactly identical, save for their change in size of course, which we assume is what Samsung is going for. What's going to be different however, and make this a "lite" version of the Galaxy Note 3 are the internals.

Yesterday, we covered just what might be inside of this more affordable version of the Galaxy Note 3 and it's pretty interesting. As for the display, we're more than likely looking at the same 5.5-inch AMOLED display that was used in the Galaxy Note II but, its processor will be a lot different. The Galaxy Note 3 Lite might feature a Hexa-Core CPU, based around a custom design of ARM's big.LITTLE architecture. The Note 3 Lite would use a Dual-Core Cortex A15 CPU clocked at 1.3 Ghz for heavy lifting and a Quad-Core 1.7 Ghz Cortex A7 CPU for everyday tasks in order to eek out battery life. This processor is more than likely going to be some sort of Exynos CPU from Samsung themselves which could mean that the Galaxy Note 3 Lite might not be available with 4G but, only time will tell.

As with all other "mini" or "lite" versions of popular high-end smartphones, pricing will be a key factor for the Galaxy Note 3 Lite. As Motorola hit it out of the park with the pricing on the Moto G, Samsung has a lot to live up to. Of course, the Note 3 Lite is arguably a more "premium" device but still, Samsung will have to make sure it's priced accordingly compared to the Galaxy Note 3.