This year’s CES has had a lot to do with wearable technology and connecting things together. So naturally, a giant like Samsung would have something to show off concerning both, right? They’ve teamed up with BMW, who have been showing off their i3 electric car to show off how wearable technology will soon be integrating with our driving life. Samsung is showing off the iRemote application for their Galaxy Gear that talks to your i3 car and gives you information like range, whether it’s locked or not and more. In fact, Samsung is even showing off methods in which to control certain aspects of the car, like being able to control the air conditioning while you’re sat nearby about to set off once more. 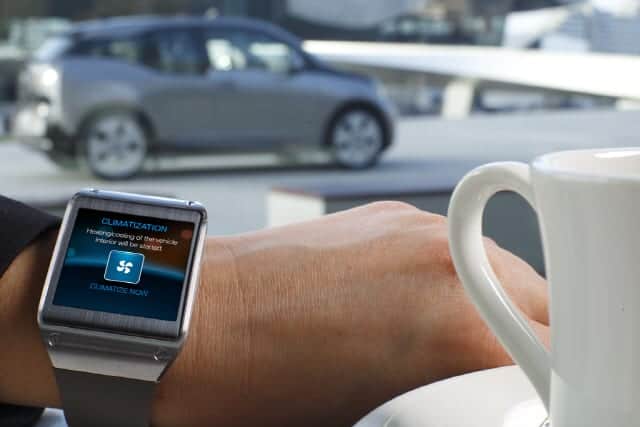 This sort of thing is clearly where we’re headed, after all wearable technology is supposed to make our lives that little bit easier and if it can help us run our cars appropriately, then that’s one more bonus. There’s no word on just when something like this is going to hit the market, as BMW’s i3 is still very much in the prototype stages but, similar apps could arrive on our wrists later this year. Pebble made an announcment this week that introduced the Pebble Steel that offered connectivity between your wrist and an appropriate Mercedes Benz model. We reviewed the Galaxy Gear and it certainly has some promise but, apps like this will be what pushes the device forward in an already crowded field that includes devices such as the Qualcomm Toq and the Sony Smartwatch 2.

We suppose that now the question is whether or not people will use this sort of thing? Keeping on top of your car’s health when commuting to work and heading out on long journeys is important but, it could end up being one of those little utilities that we all forget about too quickly. Only time will tell, as our smartphones and now our smartwatches will start to get a lot more friendly with our cars.