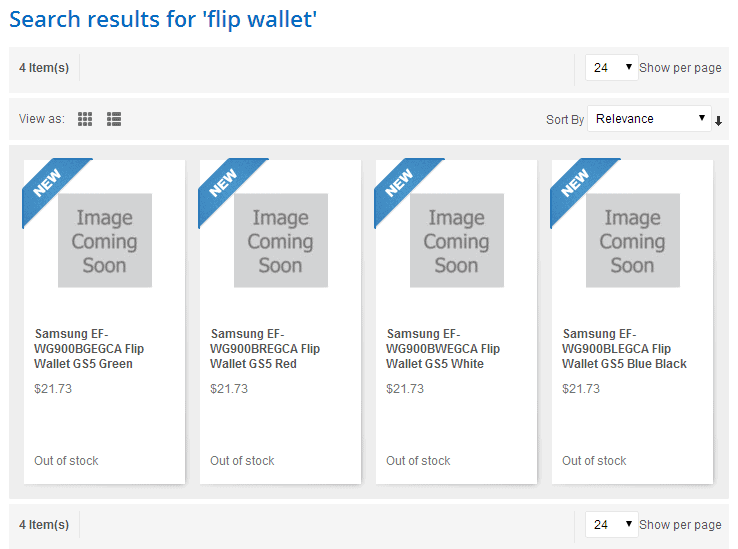 In the past couple of years, we’ve noticed that Samsung likes to launch some accessories with their flagships, like the Galaxy S and Galaxy Note line. It appears that the Galaxy S5 is going to be no different. As PureMobile has already put up some placeholders for what appear to be placeholders for several different colors of flip wallet cases for the Galaxy S5. Now this is probably pretty early, as we aren’t expecting an announcement until March. But it’s still interesting to see these pop up on their site. This could be what we call a “controlled leak” to get more buzz surrounding the Galaxy S5 before it’s actually announced. Which every manufacturer does this with every flagship. Do you remember how long we were seeing rumors about the Moto X before it was made official?

The placeholders show four different colors, which are green, red, white and blue-black. With each one going for about $21.73 on PureMobile. That price is right on target with what we have seen from other manufacturers with their own flip wallet cases. So we may see it go up when it’s actually available. As Samsung’s own accessories are normally a bit more expensive.

Additionally, @evleaks posted something about Samsung’s next flagship. Now this is nothing special, which is why we didn’t do a story just on this tweet, but evidentally the device will be called the Samsung Galaxy S5. Now who didn’t see that coming? As far as specs go, nothing’s official of course, but we’re looking at a 5.25-inch 2560 x 1440 resolution display, 3GB of RAM, either Snapdragon 800 or Exynos 6 processor, 32GB of internal storage with a microSD card slot and hopefully a 3,000 mAh battery or larger.

How many of you are excited for the Samsung Galaxy S5 to finally make it’s appearance in the next couple of months? Let us know in the comments down below.