Skip to content
Trusted By Millions
Independent, Expert Android News You Can Trust, Since 2010
Publishing More Android Than Anyone Else
7
Today
7
This Week
97
This Month
8271
This Year
125754
All Time 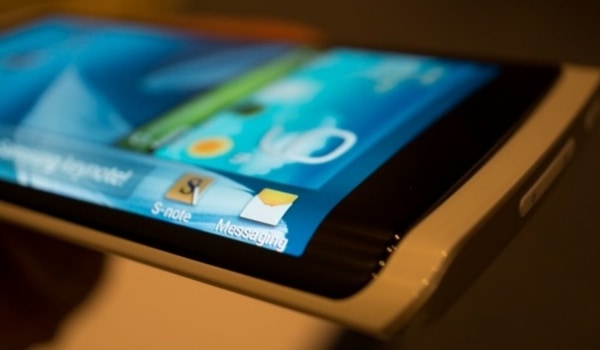 Way back in the Spring of 2012 Samsung held a big press conference to discuss their new flexible display technology, called “Youm” at the time.  They showed off a couple of different theoretical concepts for new devices that could come out, all of which either had a flexible display or just a curved one.  We’ve seen from the Galaxy Round’s release last year that curved displays aren’t always the most useful things in the world even if they do serve a purpose, but what if you curved it in a different way?  No I’m not talking curving the screen around the other axis as LG did with the very awesome LG G Flex, I’m talking about curving it backwards as we’ve seen before in Samsung’s Youm demonstration.  Bloomberg just published an interview it had with Samsung’s executive vice president, Lee Young Hee, which talks a lot about Samsung’s plans for 2014 and beyond.  She talked specifically about this year’s flagship devices, but one in particular was even more interesting than the rest.  She said that the Galaxy Note 4 will likely use a three-sided display so messages can be read from an angle, and that the device will be aimed at the high-end segment.

“We are targeting consumers who want more professional use and tend to be willing to pay more for handsets,” Lee Young Hee said.

The Galaxy Note series is one of the most expensive smartphones on the market right now, so it’s no surprise to see that Samsung is continuing that trend with the Galaxy Note 4, especially since it’s selling so well and tends to make them quite a bit of money.  The three-sided device looks an awful lot like a new patent Samsung was just awarded on December 21st, 2013.  While we thought that patent pointed toward the Galaxy S5, it looks like it might actually be the Galaxy Note 4, given that the display is very obviously curved around the edges in that patent drawing.  Couple this design with the metallic frame that is rumored and of course some crazy new user interface design and we’re likely looking at a very different Galaxy Note in the second half of this year when the Note 4 is confirmed to be released.  Samsung changed up the design on many parts of the Galaxy Note 3 when compared to the Note 2, but overall the phone still shares a lot of the same DNA as its elder brethren and of course Samsung’s other devices.  Having something as interesting and unique as a three-sided display could really make things interesting for the Note 4 and shake up the market just enough to continue the growth Samsung has seen with that line of devices.