In the world of mobility, there is nothing that Samsung would like to do more than to surpass Apple – in every category; sales of smartphones, tablets, innovation, and in the courtroom. They have already accomplished a few of these goals on the worldwide stage, but Samsung would like to do it in Apple's on "orchard," if you will…the U.S. Many of Samsung's Apple problems stem from Apple's users – they are extremely loyal and even when other devices are superior in many ways, Apple supporters will pull out a few buzz words to defend Apple, ones that Apple has strategically placed in their minds. My favorite one is "retina display." It works out to 326 PPI (pixels per inch) and the human eye is good to about 300 PPI. Retina Display is defined in Wikipedia as:

Retina Display, stylized as Retina display, is a brand name used by Apple for liquid crystal displays that have a pixel density high enough that the human eye is unable to discern individual pixels at a typical viewing distance.

Even though many Samsung devices far surpass Apple's Retina Display, their Galaxy S4 has 441 PPI, but because it's not Apple's "Retina Display," it could not possibly be better than an iPhone 5S's screen display – go figure, but I digress.

On Which? Tech Daily, U.K.'s version of Consumers Report, they ran benchmarks on eight popular tablets to see "which" one is fastest and it seems that the Samsung Galaxy Note 10.1 (2014)came out on top, edging out the new Apple iPad Air.  Which stated that, except for Microsoft's Surface Pro 2, which has the innards of a laptop, the Galaxy Note 10.1 (2014) is the fastest tablet that money can buy.

The results are based on the industry recognized Geekbench software that is designed to test multi-core performance by replicating a series of everyday tasks.  Each test, results in a score, that are then combined to calculate a final numerical score.  The higher the total result, the faster the tablet.  Technically this means that if a tablet's score is five times as great, then that tablet would be five times faster.  Here are the list of scores:

Should you base your decision on strictly speed – of course not, as many parts go into making up a tablet. You have quality of the parts, quality of the build, the functionality of the device, the design and how it feels in your hand, also what software is on the device and what apps are available. Most flagship devices will give you similar performance. So, to take something positive away from these scores, for instance, if you buy an iPad Air or a Galaxy Note 10.1 (2014) you would be a happy consumer, but if you purchased an Amazon Kindle Fire HDX with a score of 2,667 and a iPad 2 with a score of only 502, you would be quite displeased with the iPad 2 over the Kindle Fire HDX.

Scores are something that do not necessarily define a device, but are still going to be widely used as a means of comparison to satisfy the tech savvy that like numbers and scores. So what are your conclusions based on these test results. 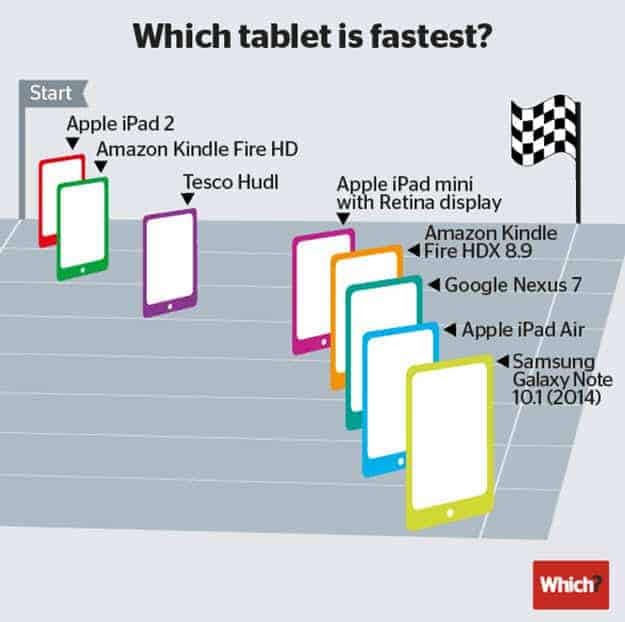