Skip to content
Trusted By Millions
Independent, Expert Android News You Can Trust, Since 2010
Publishing More Android Than Anyone Else
36
Today
36
This Week
301
This Month
5484
This Year
115489
All Time CES is right around the corner and we’re pretty excited about it. The event kicks off on January 7th in Las Vegas, Nevada. We expect to see quite a few companies debut wearable products this year. Rockchip, or the Fuzhou Rockchip Electronics company, is rumored to debut a new Smart Glass product as well a Rockchip Smart Watch at CES. This info comes to us from a leaked presentation slide from Chines site Weibo, first reported by 1Pad.cn.

The Rockchip Smart Glass is going to run on the Rockchip dual-core RK3168 low power SoC clocked at 1.6 GHz. Smart Glass will come with 1 GB of RAM, 4 GB of onboard storage, and a 5-megapixel camera that supports 1080p video capture. The glasses will support Wi-Fi and Bluetooth connectivity and have integrated GPS. The design looks similar to Google Glass and has its display positioned over the users right eye. We don’t have any other details at this point, but these look pretty interesting. The new Rockchip glasses are supposed to differ from Google Glass in its display and the way it sends sounds to the wearer. 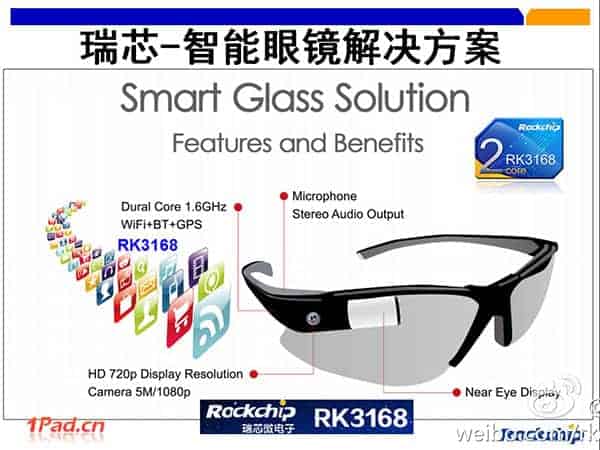 Rockchip is also going to be unveiling their new RK3288 quad-core SoC next week at CES. This new chipset is manufactured using the 28 nm process just like the RK3168. It features an ARM Cortex A-12 CPU. The RK 3288 will have a maximum clock speed of 1.8 GHz and pack a Mali-T628 GPU. It will also support H.265 video decoding and 4G LTE connectivity. The chipset is expected to be released sometime in the second half of 2014. Rockchip has already sent out invites to this announcement, and the company will be set up for 3 full days at CES.

The last bit of rumor coming from 1Pad.cn is that Rockchip is readying its own smartwatch offering. Their Smart Watch is still just a rumor; they may unveil the product next week alongside their Smart Glass and new SoC. CES will get started in less than a week, so we don’t have long to wait.