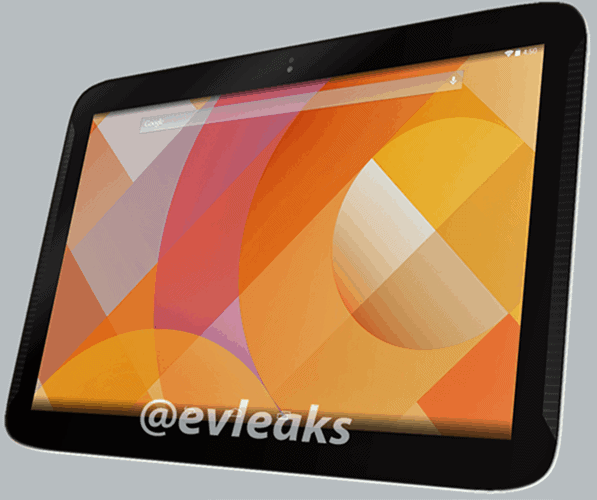 On Tuesday, one of our favorite leakers, Evleaks, posted a picture of the Nexus 10, which he says is still made by Samsung, along with some specs. According to Evleaks, the Samsung-made Nexus 10 is going to sport an Exynos 5 processor (probably octa-core) along with a WQXGA display (that’s 2560×1600), 3GB of RAM and 16GB or 32GB storage options. Additionally, Evleaks says that the device is running Android 4.5 which is likely to be KitKat MR2.

As you can see from the image above, it does have the translucent status bar and navigation bar. Which the current Nexus 10, and 7 do not have. It’s also got front-facing speakers, which is something that no other tablet has. Well the original Galaxy Note 10.1 had it, but the newer version put them on the sides. And the new Galaxy Note Pro and Tab Pro’s also have the speakers on the side.

We’ve seen lots of rumors and leaks of the Nexus 10 already, but we have reason to believe this one more than the others. Why? Well because we haven’t seen anything about the Nexus 10 come out of Evleaks until today. And Evleaks is almost always spot-on with his leaks and rumors that he posts. Yes the Nexus 10 did leak out on Google Play back in October before the Nexus 5 did, and we did see the specs. These specs are also very close to those specs. So it’s going to be interesting to see what happens here.

At this point it looks like it’s not ASUS making the Nexus 10, like it was rumored. But if the new Nexus 10 is built the same as the original with newer specs of course, I’d be perfectly happy. I’d love to see a 64GB model, but I’m not sure that’s going to happen. How many of you have been patiently waiting for the new Nexus 10 to show up in the Play Store so you can throw money at it? Let us know in the commetnts below.

Pulled the “Nexus 10” tweet. Was sent to multiple publications, along with slightly differing “corroborating evidence.” Signs of a hoax.