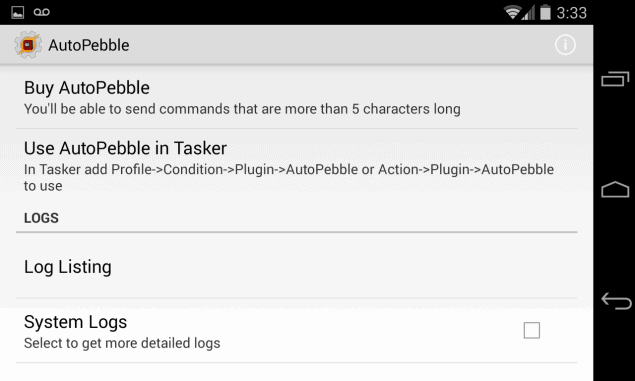 Tasker is one of the sole reasons why is was so excited to get an Android device back in the day when they were first releasing. All the functionality of automating tons of different tasks or commands on your device just seemed so appealing to me. Although I don't personally own a Pebble Smartwatch, we here at Android Headlines know that many of you do as it's a fairly popular little smartwatch among today's other offerings. So why all this talk about Tasker and the Pebble Smartwatch together? Because of a new and nifty little app called Autopebble, that allows you to get automated commands or tasks completed with your Pebble smartwatch much like Tasker provides for Android users with their smartphones and tablets.

The capabilities and options on what you can do with Autopebble and the Pebble Smartwatch are seemingly limitless, unlike the out of the box abilities that the Pebble provides from the start. The coolest thing we've noticed that it does is turn your Pebble Smartwatch into a TV remote, because who doesn't have a need for that. Why would you want to give yourself any extra work by having to hunt down the correct remotes for your TV and such, with Autopebble you should no longer have to. It also just seems so futuristic to have such a capability on a watch which might be part of the allure. It also makes me want a Pebble Smartwatch now more than ever.

Among the TV remote gig, Autopebble can also open up the capabilities of your Pebble Smartwatch to do things like open up notes and complete commands when you shake the watch. The shaking bit seems rather cool to us as well, although we imagine your wrist might get a bit tired of you tend to set these kinds of commands for many uses. Autopebble also provides the user with multiple long/press or click options. As the developers of Autopebble state, all of your Pebble's buttons can have different modes, allowing you to do things like short click a button to turn a light on, and long click that same button to give you the status of the light. If you dream of what your watch can do, chances are that Autopebble might be able to help you make those dreams come true. The app is now freely out of beta and is available for anyone who wants to use this in pairing with their Pebble Smartwatch, and you can grab the app from the Play Store link. Does the creation of this app make anyone want to buy a Pebble over another Smartwatch? That is, if you're in the market for a smartwatch in the first place.http://youtu.be/4b9JVDp8JHM