It turns out Mobile Kepler is not just the most advanced mobile GPU by far thanks to its full OpenGL 4.4 API support, but according to a recent GFXBench benchmak, it’s also the fastest GPU, and not just compared to other mobile GPUs like the ones we find in Nexus 5 or iPhone 5S and iPad 3, but also faster than Intel’s mainstream Haswell GPU.

As you can see below, it beat the Apple A7 GPU (PowerVR 6430) by a factor of 2:1 and it marginally beat the Intel HD 4400 GPU, too, which is a great feat in itself, because that GPU was being praised last year for how good it is – in the PC class of GPUs. With Denver Nvidia will also be getting dangerously close to compete with Intel in CPUs, too. Nvidia has said it’s a CPU that has super-high single-threaded and also multi-threaded performance, and some have speculated that it should be as fast as the Sandy Bridge core and AMD’s latest A10 core. 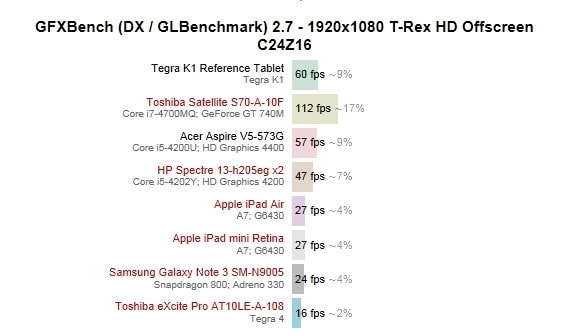 Assuming a late 2014 arrival for Tegra K1 with Denver, that would put it roughly where a Sandy Bridge laptop with a mid-range Nvidia card was 3 years before that, in late 2011. That should be impressive by itself, because until now mobile chips have been more like 7-8 years behind PC chips in performance.

The best part is that while Tegra K1 will be made using the 28nm process, Tegra K2 (or whatever they call the Denver/Maxwell version) will be made at 16nm FinFET. Then we can easily assume it should have at least 2 SMX clusters (384 cores), and of course will have a new Maxwell architecture, which would put it where this year’s mid-range Nvidia GPUs are. Nvidia should match the performance of its mid-range laptop GPUs from this year, with a mobile GPU that will go into tablets and perhaps even phones. That’s only 1 year difference, and quite incredible.

Then, if its Denver CPU gets at least a 30 percent boost from the move to 16nm FinFET from 28nm (which it should very easily do), and assuming Denver at 28nm is already as powerful as as Sandy Bridge (something that still needs to be seen, but wouldn’t be impossible), then we’re looking at Nvidia matching or at least getting extremely close to Intel in CPU performance next year, too.

This may blow people’s minds, because it seems so hard to believe, but if you do the math, it may not be. Intel has barely improved the performance of its chips in the past few years, with Ivy Bridge getting only a 10 percent boost over Sandy Bridge, and Haswell getting another measly 5 percent boost in performance. The upcoming Broadwell might not increase the performance at all, or at most it will add another 5 percent.

The only problem? That had a huge side-effect of not being able to focus on performance over the past few years. If you have a Sandy Bridge laptop already, you’re not getting a Haswell laptop for its slight 15-20 percent performance increase, but for the longer battery life.

History might repeat itself soon, and ARM chips will be getting faster than Intel’s chips, because Intel is focusing too much on lowering power consumption. But unlike with the Atom situation, this one is much more dangerous for Intel for one simple reason: price. Intel sells its Core chips for $150-$200. Nvidia sells its mobile chips for at least 5x less. If Nvidia can match, or at least get very close to Intel at that price-point, then Intel is in big trouble, because its super-profitable chips will get as commoditized as ARM chips.