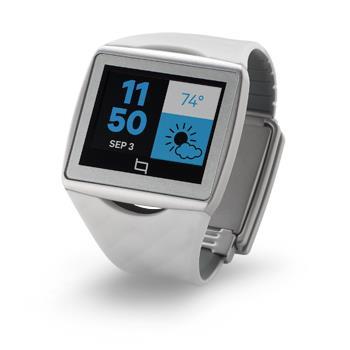 When Qualcomm launched their very own smartwatch last year, it was more of an experiment than anything else. However, it is a real product and you can go ahead and purchase your very own Toq for your own wrist. While it's not the most inspiring smartwatch, it was have one of the better displays on the market. The Mirasol display technology used by Qualcomm here is great for battery life and makes reading it in sunlight a breeze, even if it becomes a little washed out. Unlike the Pebble, the Toq joins the likes of the Galaxy Gear and Sony's Smartwatch 2 by offering color on your wrist, which is nice, right? The Toq may well be more about what the Mirasol technology can do, but all-in-all it's a great device, it just needs some added polish.

The limited edition – which is bizarre, as the device as a whole is said to be a limited run – in White, is now available from Qualcomm's own website. And yes, it still costs $349.99. Which is a lot of money for a smartwatch, no matter how fancy it is. In fact, speaking of fancy, Pebble's new Steel timepiece only comes in at $249 and while the display isn't nearly as nice to look at, it has a much better ecosystem of apps and funny watch faces. As we said above, the Toq is available to consumers and as such, it's available from Amazon, in either Black or White. Unlike Qualcomm's own store though, you'll be waiting a long time for the White version to arrive from Amazon.

The Toq's price is still a limiting factor here and it's not all that easy to say "it's worth it". For those interested in smartwatches that simply want to go a different route, the Toq won't disappoint, but it won't blow you away either. It's a real shame that the Toq is a little too pricey for most, as the Mirasol technology at work here is really quite good. Qualcomm isn't exactly known for consumer products though, so we can't stay too mad at them.