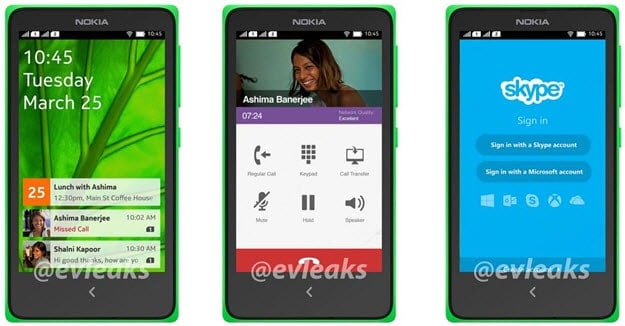 The Nokia Normandy keeps popping up on the radar, the only real question is if it will ever see the outside of the Nokia's walls and be a "real" device – after all, when you think of Nokia, you think of Microsoft, Windows Phone, or turmoil, but never Android.  Today our faithful leaker, @Evleaks, sent out a new tweet, titled: "Android on Nokia ( -virtual buttons)." This time there was only one color of the phone, but three screenshots that lead us to believe that this may be using a heavily skinned Android, much like Amazon uses on its tablets. The images being shared by @Evleaks show three different screens – one is a lock screen with three notifications, the second is a call screen, and the third screen is a Skype splash screen.  In the status bar your can see that this is a dual-SIM device.

Two weeks ago our trusty leaker, @Evleaks, treated us to pictures of the so-called "Nokia Normandy, 2013" in a variety of colors.  It is rumored to be a low-end Nokia device that happens to run the Android operating system. 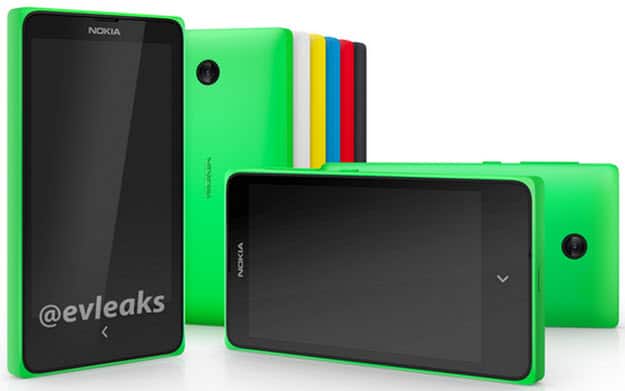 Certainly it looks a lot like a Lumia, which is not a bad thing, although the odd, one "button," design leaves a lot to the imagination – is it a back or return button, and where are the other two…strictly capacitive, but then why is just this one showing? Rumor has it that Nokia will be using virtual buttons with Android but still, the inclusion of what looks to be a back button is still a strange one.  All of this is very interesting, but with Microsoft's acquisition to be completed in early 2014, we have to ask ourselves a couple of questions.  One, is Nokia working on this on their own and will Microsoft scrap the project once their takeover is complete, or…Two, is Microsoft backing the project and going to sell both a high-end Nokia Windows Phone and a low-end Android device, just to hedge their bets?

Nokia is legendary for built quality and also for the great cameras that they have included in their smartphones; couple that with Android and we could have a sure winner. The Normandy is real, but the biggest question is whether it will be released before Microsoft takes complete control, or is all a part of their plans.

Please let us know what you think on our Google+ Page about the Normandy project – would you like to see a Nokia device running an Android operating system.