Some recent photo leaks have surfaced of the Nokia Normandy, the Android powered Nokia handset that there has been so much talk over. This isn’t the first we’ve heard of the Nokia Normandy, and it won’t be the last. Previously we had only heard rumors about the famed device that Nokia had in the works, but we were a little more than skeptical because Nokia won’t be ‘Nokia’ for much longer. Microsoft’s acquisition of the once famous Finnish handset maker causes some to believe that the device would never see the light of day and well, it makes sense on Microsoft’s end that it wouldn’t. If you think about it, why would they want a handset floating around out there available for customers that is made by the company they now own, but runs an OS that directly competes with the one that they develop? While it would be an understandable scenario for Microsoft to try and stop this handset from getting released, there may not be much they can do about it as plans to manufacture the smartphone were already in motion before Microsoft ever purchased Nokia in the first place. 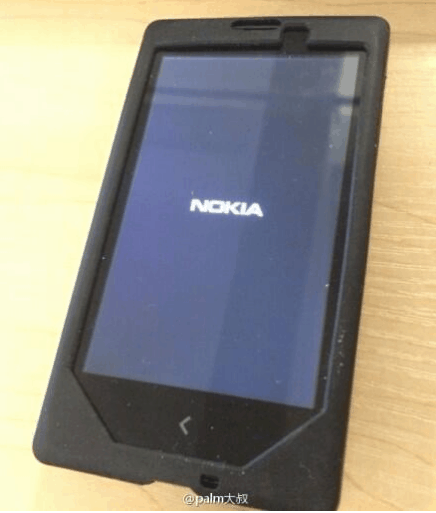 These recent photo leaks come to us from @evleaks twitter account, who is well known for releasing photos of devices before they launch. The recent images are pictures of the Normandy in it’s prototype form, powered on for all to see with the Nokia Splash screen staring straight into the camera. Little is known about the device other than some rumors that it is supposed to be closer to the low end side of the spectrum, so even though consumers have wanted a Nokia made Android smartphone for a while now, this may not be the handset they were hoping for.

Evleaks has provided the public with images of the Normandy before, although this image shows the phone powered on and is slightly less colorful than the ones we saw previously. Could the Normandy really be coming to the public? It would seem so, and it shouldn’t be long before we start to see some better images or even videos of the Normandy. Let us know what you think about the Nokia Normandy in the comments.