Last March Samsung announced the Galaxy S4, and would go on to sell more smartphones than any other manufacturer in the world with the help of that device.  This year will see the arrival of the Galaxy S5, surprise surprise, and with that will likely come a complete redesign of the Galaxy S experience.  Since the very first Galaxy S phone launched, all Galaxy S models following have shared some similar design cues, from the rounded-off square corners to the home button, you can tell that a device is made by Samsung without ever seeing the logo on the top.  All Galaxy S phones have also features a primarily plastic build; something many have complained about especially given the price point these phones launch at.  That looks to change with the Galaxy S5 and Design 3.0, as Samsung calls it, and will likely feature a metal frame along with a 5.25-inch display that’ll take up nearly the entire front of the phone, much like the LG G2‘s display.  The latest patent from the US Patent Office filed on December 31st 2013 shows some more interesting design decisions, and one that’ll likely have folks cheering from coast to coast over the world. 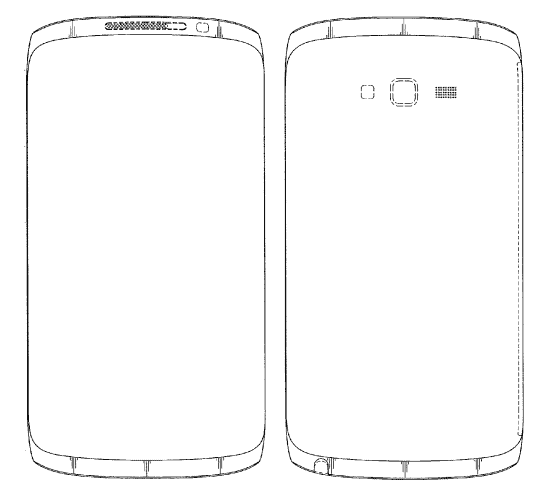 While this patent doesn’t specifically say Galaxy S5, it’s likely not coincidental that Samsung filed this patent again right before the upcoming announcement of their Next Big Thing, and that this patent essentially takes things from many experimental Samsung devices and puts them into one device.  First of all the device features a display that’s slightly curved on each edge of the phone, much like we saw with Samsung’s very first flexible display presentation, which is curved the exact opposite of the Galaxy Round that released in November.  Then there’s the rather obvious look of the back that’s taken straight from the Galaxy J which just launched in Japan recently. 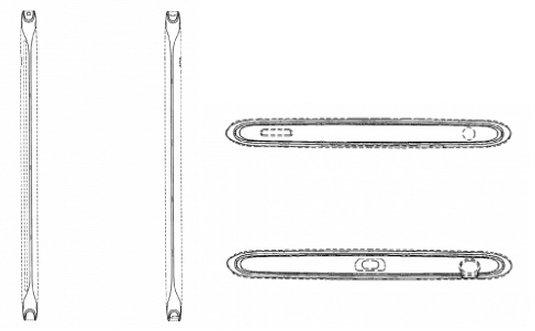 Of course let’s not overlook the fact that the home button and capacitive buttons are gone from the face, which is a huge change in Samsung design and one that we certainly didn’t see coming given the fact that Samsung has put a physical home button on every device from phones to tablets in the last year or two.  There’s also what seems to be the power button on top, which is a big change from the button on the right side of the device.  Oh and let’s not forget the volume rocker which is seemingly left out of the device drawing altogether.

There’s also what seems to be a slot for the S-Pen on the bottom of the device, which has us wondering if Samsung is planning on including the S-Pen on both the Galaxy S and Galaxy Note devices this year. This would make sense since the 5.25-inch screen rumored for the Galaxy S5 is only 0.05 inches smaller than the 5.3-inch screen that shipped with the original Galaxy Note.  You’ll still see a bigger screen on the Galaxy Note 4, which would likely approach 6 inches this year if this design cue gives us any note.  All in all this is an incredibly interesting turn of events, and could prove to be a truly Next Big Thing for Samsung if it is the Galaxy S5.