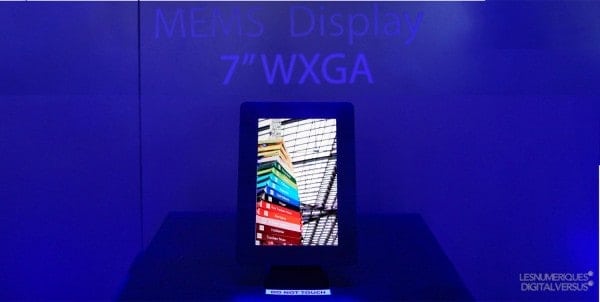 The major feature of MEMS displays seems to be its Ultra-Low Power Consumption. The display tech is said to offer crisp clear images even in extreme conditions, and further reduces power when less color is needed. If we indeed are going to see some tablets that use MEMS displays within six months time, perhaps we could see this as an adoption for the display type of other major manufacturers. Although time will tell. The advantages of the MEMS display lie partly in the backlighting system. It's reported that it is made up of RGB(Red, Blue, Green) diodes, and light that is emitted from those diodes is emitted in varied amounts due to the tiny shutters in front of them that open and close at different speeds. The light also avoids having to pass through liquid crystal cells. What this basically does is keep the display bright no matter the conditions, and helps to keep it from putting more stress on the backlight from working too hard, which in turn can help with power consumption.

It's still too early to tell how well these displays will actually perform, from the sounds of it the displays should provide a somewhat better experience in terms of brightness. We also look forward to seeing how well the battery holds up on tablets with MEMS displays, hopefully we'll see these sometime in the summer as sharp is predicted.