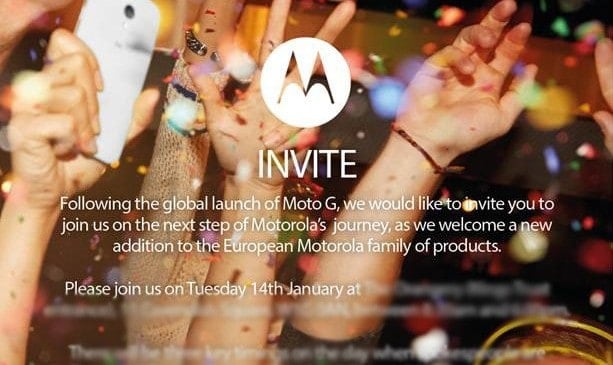 CES 2014 is finally getting underway officially and while most of the mobile news might be behind us, that hasn't stopped Motorola from making a little noise of their own. Back when the Moto X was Motorola's latest and greatest, Europeans – and this Brit right here – were a little peeved to see that the Moto X wasn't leaving the US. Of course, logistically that'd be a nightmare and so Europe didn't stay mad at Moto for too long. Since then, we've seen the announcement of the excellent value for money Moto G which is easily one of the best mid-range smartphones out there, ticking all the right smartphone boxes while appealing to those on a budget.

Now, it looks like Motorola is ready to bring something else to Europe, as Android Central has learnt the Google company is holding a Press Event in London next week, on January 14th. While we're not sure what Motorola have in store for us, we're pretty interested in seeing just what "the next step of Motorola's journey" is. Word is that Motorola could very well be bringing the Moto X to Europe but, we're not sure how such a thing would work. After all, one of the main attractions of the Moto X – besides the customozation – is the 5-day shipping they offer, if the Moto X was to be flown over from the States, that would quickly turn into 2-weeks. Also, way back when the Moto X was announced in the States, Motorola said that they working on something different for Europe.

The company now owned by Google used to offer some pretty decent devices in Europe and way back when, the RAZR was just as popular as it was in the US. Still, whatever it is, we're sure that Motorola will be looking to go big in order to rebuild their brand presence across the pond. The Moto G is great and all but, it's hardly a headline-grabbing device, only high-end and innovative devices will help Motorola climb back up the mindshare ladder in Europe, a region where Samsung is just as dominant.