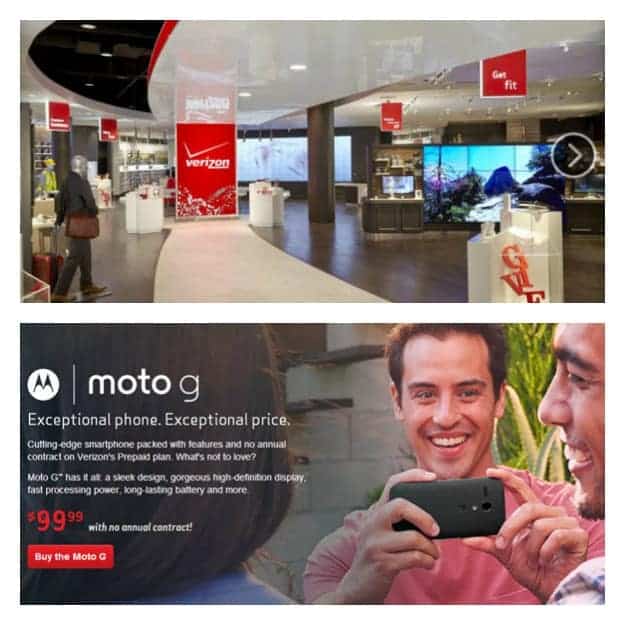 As Craig Ferguson says when he begins each of his shows, "This is a great day for America!" We were greeted with the tweet below from Motorola Mobility today that announces their Moto G is available at Verizon, starting today, for only $99 "with no annual contract!" Now is that a great day or what?

The Moto G was already a bargain when the GSM version became available early last month for only $179.99, but then a Verizon version showed up at the Best Buy stores for $80 less. Boost Mobile then announced their Moto G for only $129.99. Today, Verizon is officially launching their Moto G for that same Best Buy price of $99.99.  This was always Verizon's official launch date for the Moto G, but they allowed Best Buy to start selling them as soon as their stock arrived, so there may already be some happy Moto G customers out there. 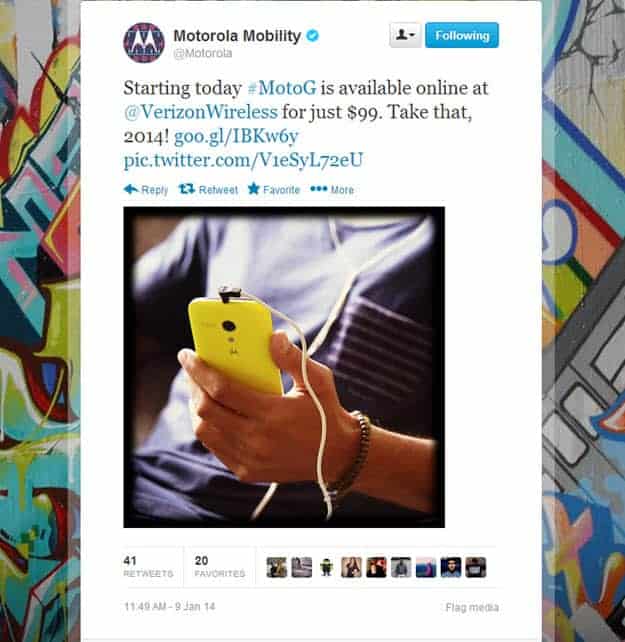 The Moto G is Motorola's (and Google's) attempt to make that "device for the masses."  So people who cannot afford a Samsung Galaxy S4, Note 3, a HTC One, or a LG G2, can afford a new device and not settle for someone's "hand-me-downs."  It is already running Android 4.4 KitKat and has a display of 4.5-inch with a 720p resolution – that is 329 ppi.  Running things from inside is a Snapdragon 400 quad-core processor clocked at 1.2GHz, 1GB RAM and 8GB of Internal Storage, 5MP Main Camera with 1.3MP Front-Facing Camera (FFC) for video chatting or taking a selfie.  It houses a 2070mAh Battery and runs on Verizon's 3G network only – no 4G LTE.

Verizon offers two prepaid plans that start at $60 a month for unlimited talk and text, with 2GB of data.  If you are already on a contract, you cannot pick-up the Moto G as a means to upgrade – the Moto G must be on a separate contract for six months before you can switch.  Remember that you cannot use Verizon's 4G LTE speeds on the Moto G, however, if you are retired and at home a lot (or the local Starbucks or Panera down the street), work-from-home, or in an office environment where Wi-Fi is available, that will solve much of your lack of 4G LTE.

Please let us know on our Google+ Page if you will be picking up this great bargain at Verizon or Best Buy, or does the no 4G LTE keep you from making this purchase – still a great buy for a great phone for newbies to the smartphone world, or as a backup device.