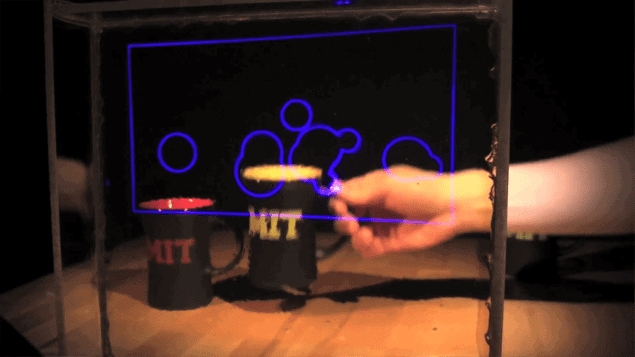 Thanks to a research team at MIT, we might start to see more advancements in the field of wearable tech as well as any other products that might use transparent displays. Google Glass as well as other emerging wearable tech products, have already started using technology like this, and have incorporated it into their upcoming devices, but if the price of a set of Google Glass is any indication, transparent display technology isn't necessarily on the cheap end. That's what MIT is hoping to change with this little project. As seen in the video below, the research team responsible for putting together this display, showcases the transparent screen to demonstrate how it could eventually and hopefully be used with other technology.

The display is made of a thin plastic, and it's a great possibility that we could see this used with all sorts of different products that have a need for transparent screens. The plastic coating can reportedly be applied to just about any glass surface, which gives it a world of possible applications, from windows, mirrors, and even the potential to be used on windshields. Since this tech is has the potential to be a lot cheaper then what is being used now for transparent displays, it'll be easier to work with and give plenty of companies an opportunity to do some research of their own, utilizing this technology and perhaps bringing transparent display tech to market in more products faster.

The thin coated plastic sheeting which the MIT research group has created, contains nanoparticles that it make it possible to project color lighting onto anything that the plastic is applied to. So while the video only shows the color blue being projected onto the glass display setup they are showing off, they hope to end up making it possible to further these technological advancements to allow the use of a full color spectrum in the same way they are using just the blue color now. They specifically talk about the use of red, green, and blue so as to allow the ability to project the full color spectrum onto any surface that this coating is applied to. The nanoparticles used in the coating are basically able to pick which wavelengths to scatter, which is how we end up being able to see the blue light projected onto the glass. The nanoparticles are letting everything pass through the glass except for the chosen color wavelength shown in the video. Seeing is believing, and we believe that this tech is truly amazing stuff. The possibilities of how it can be used are only limited to ones imagination. As we progress further into the year, some of the wearable tech we've already seen in demos will start to emerge for consumer use, and maybe by early next year we'll start to see things with this see through tech applied.http://youtu.be/0aw58MUciWw