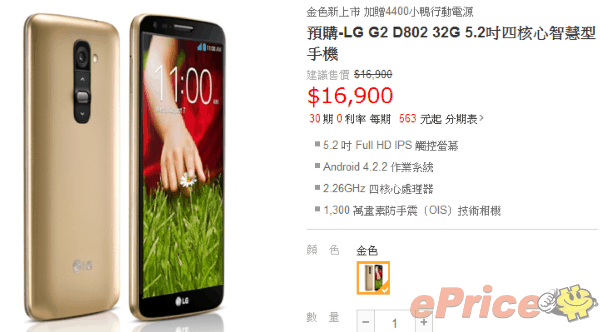 It's sometimes a little galling to see a trend emerge in the tech industry, perhaps even more so in the mobile industry. This year saw the arrival of the gold smartphone, or at least gold-looking devices. After all, not all that glitters is gold. Needless to say, pretty much everyone in the mobile industry has come out with a gold smartphone in the past year. HTC have a gold HTC One, and they even made an 18k gold device, Samsung have the Galaxy S4 and the Galaxy Note 3 in gold and of course, the iPhone now comes in "champagne", whatever that is. Now, it looks like it's LG's turn to give their flagship device  the midas touch.

As ePrice have apparently uncovered, the G2 will soon be available in Gold with the 32GB version costing around $560 and the 16GB version coming in around $500. So, is that worth it for a gold smartphone? Well, probably not but, the G2 is one of the best devices to come out of 2013, as we found out in our review. With a Snapdragon 800, a great display and an innovative button placement that actually makes a lot of sense it presents itself as a pretty damn good flagship. Unfortunately for LG though, it hasn't sold very well, which we assume was mostly down to timing and facing fierce competition from the marketing machine that is Samsung.

Will a new color of the G2 get people interested once again? Probably not but, it can't hurt either. In fact, the G2 is pretty reasonably priced right now in the US, you can pick it up on Amazon on Verizon for just $50 on contract, and just $30 on contract on AT&T. Personalizing our smartphones has definitely become a thing in the past 12 months and there are now more accessories than ever before so, there is the argument that you could simply buy a gold-colored case for the G2. Would you buy a gold smartphone, of any make or model? Let us know in the comments and over on Google+!