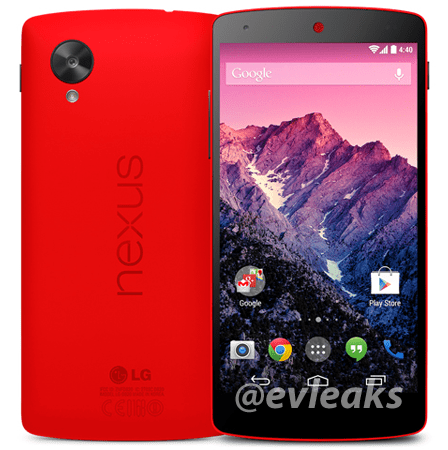 So when we first heard that there may be more colors of the Nexus 5 coming. Many people thought it was fake, and we got quite a bit of flack about it. But we've seen more and more leaks about a red Nexus 5. We've seen shipments of them, and now we're looking at a press shot that Evleaks has leaked out on Twitter. There's not much to say about this one, except that it's red. Similar to the white Nexus 5, the earpiece matches the back color of the Nexus 5. It actually looks really sharp with the red earpiece, what do the rest of you think?

For those that are unfamiliar, the Nexus 5 comes with a 5-inch 1080p display, Qualcomm Snapdragon 800 processor clocked at 2.3GHz, 2GB of RAM, 16GB or 32GB of internal storage, 8MP camera on the back and a 2MP shooter on the front. With a 2300mAh battery inside and is running the latest version of Android 4.4.2. Because it is a Nexus, it does get updates before any other phone, except other Nexus devices of course. Right now it's priced at $350 for the 16GB and $400 for the 32GB model. Which is a pretty decent price considering it's off-contract and unlocked.

How many of you are interested in a colored Nexus 5? What about this red Nexus 5? Let us know in the comments down below.