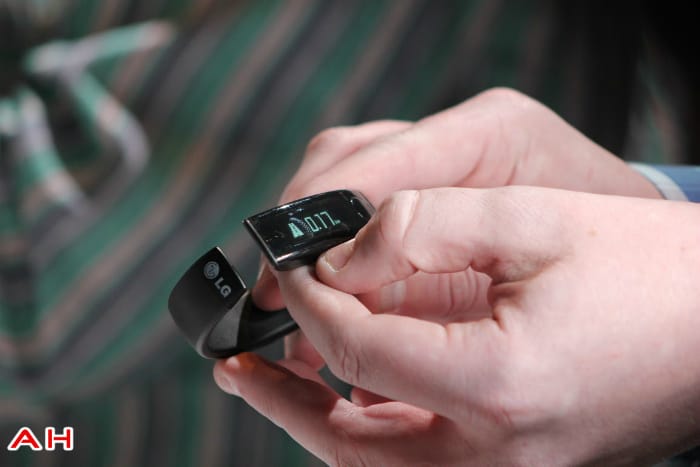 For the past few years, we've really only seen tablets at CES. However, 2014 is a bit different. I've been saying for a while that we're going to see lots of wearables and so far I'm right. Right now, LG is doing their press conference in Las Vegas, kicking off press day as they normally do. LG has just announced the new Lifeband Touch. Which is a new fitness tracking band that is looking to take aim at Nike's Fuelband, Fitbit's Force/Flex, and Jawbone's UP/UP24. It does add an OLED touchscreen display into the mix. Not only is it tracking your steps, calories, and workout monitor, but it also includes standard smartwatch features such as event notifications for a connected smartphone, and obviously it can tell time, since it has "smartwatch features".

Additionally, the new Lifeband Touch can be used with LG's new Heart Rate earphones, which monitor your pulse by measuring blood flow in your ear canal. At this point, neither device has a price or a release date. I'd expect the Lifeband Touch to be priced at $150 or higher. But I'd be happy to be wrong. This just the first of what I believe will be hundreds of wearables we'll see at CES this week. It's definitely an interesting one, as it looks pretty small, almost like the Nike Fuelband, which I think is great. Although I'd love to see what kind of integration it has with other apps. Like Calorie Counter, etc.

Are any of you out there health conscious? And looking at wearables like the Fitbit Force, or the LG Lifeband Touch? The Lifeband Touch definitely looks interesting and something I'd be interested in. Hopefully we'll get pricing and availability pretty soon. It'll be on display all week, so hopefully we can get some hands on of the Lifeband Touch later this week.