Although the previous Intel Atom architecture was only 32-bit and had some hard limitations baked in it, the new one supports both 32-bit and the 64-bit extensions, just like Intel’s other chips, although for the very first versions of this architecture, the 64-bit extension seems to have been disabled (probably to save cost, and because the OS wouldn’t need it at the time anyway).

Intel is now saying that they’ve already finished pushing the 64-bit optimizations for KitKat. Intel is the one making sure the latest versions of Android work on its chips, so now they’ve not only made sure KitKat works on its latest Atom chips, but also that the 64-bit extension works, so they probably had to modify that version of KitKat to support 64-bit.

Google doesn’t yet support 64-bit in Android, but hopefully with all latest craze about ARMv8 and 64-bit chips, they’re going to use a Linux kernel that fully supports ARMv8 in the next version of Android, whether it’s Android 4.5 or 5.0 (I’m hoping 5.0, so we can already see devices coming out with it at the end of the year). Obviously, support for 64-bit was already baked in the old Linux kernels.

Speaking of ARMv8, though, what everyone is excited about when they say “64-bit” chips for smartphones, they are usually referring to ARMv8, and not necessarily to Intel64, and that’s because when Apple came out with the 64-bit enabled iPhone 5S, it showed some pretty impressive performance gains in more than one area, which Intel’s own Atom doesn’t have: 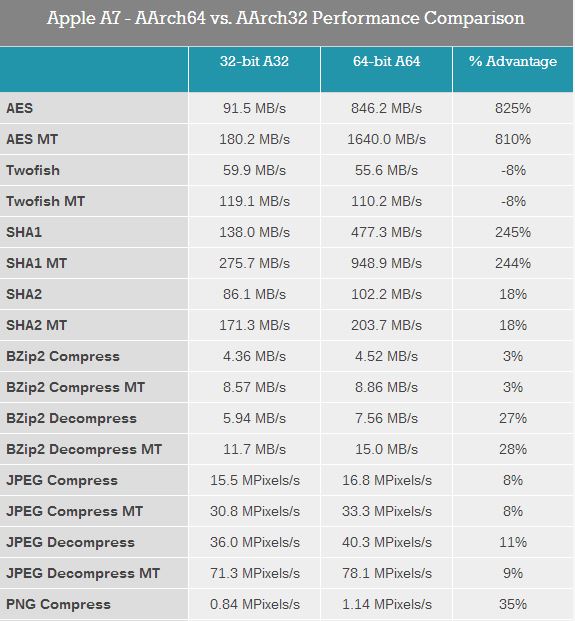 Another advantage of ARMv8 over Intel’s x86-x64 is that the 32-bit and 64-bit architectures can actually be separated, and relatively soon. All we need is to have all chip makers get to the point where even their low-end chips are ARMv8, for Android to be 64-bit, and for Android apps to have a 64-bit version, too, which should take around 3 years. After that, chip makers could completely dump the 32-bit architecture support from ARMv8, and make chips a lot leaner, and therefore they can be made more efficient, more powerful and more cost-effective.

Even if Intel is able to do the same eventually, it’s going to be a lot harder because the 64-bit part is an extension of the 32-bit part, unlike with ARMv8 where the two parts are completely separated, and it won’t happen anytime soon, because there’s so much legacy stuff it needs to support in its chips.

I don’t think we’ll see any 64-bit Atom chips in smartphones until the second part of this year, which should be right around the time Cortex A53, Cortex A57 and Denver should be out.