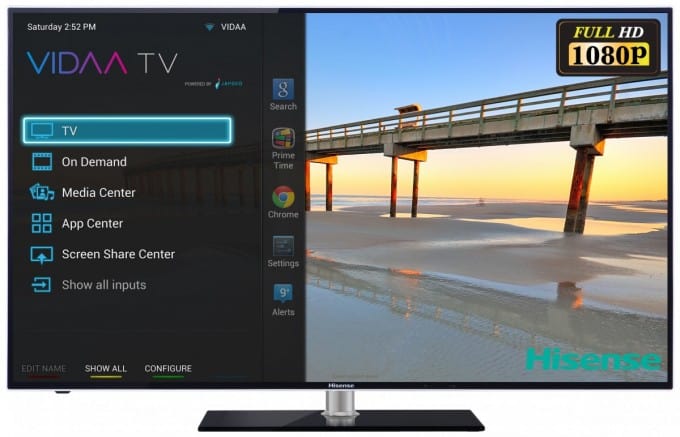 This year at CES has been a lot like last year. Although there are a ton more wearables like new smartwatches, there are a ton of new Android TVs just like at CES 2013. Hisense is stepping into the smart TV ring this year. After releasing products like the Hisense Pulse in recent years, they just announced a new line of Android-powered smart TVs. Dubbed the VIDAA series, they will arrive in three sizes. 50, 55, and 65-inch LED televisions will be available starting in March of this year.

The VIDAA line is running an unknown version of Android underneath a simple and powerful custom Hisense UI. The company is offering a smart TV with multi-core processing and tons of features. The televisions have a built-in Media Center, Video On Demand, Applications and Wi-Fi for full web browsing if you want. Of course there's Live TV as well, making these some of the most powerful smart TVs to hit the market. The VIDAA line of televisions even support screen sharing, making it easier than ever for you to share video, photos, and play music right from your smartphone or tablet.

"Hisense has boldly re-invented the concept of Smart TV with the VIDAA series. By combining a sleek and elegant look with the most intuitive UI and innovative remote control, our television is no longer just Smart – it's simply brilliant," said Jonathan Frank, Vice President of Marketing, Hisense USA.

Hisense did not make it clear if the VIDAA TVs would have full access to the Google Play Store for apps. We're also not sure what version of Android will be shipped on these units. Hisense promised an update to its existing Google TV offerings over a year ago, but we haven't seen anything yet.

The company has these new smart TVs on display at CES but hasn't provided us with a firm release date. They also have not confirmed any sort of pricing for them, unfortunately. Hopefully they provide a much better experience than Hisense's existing Google TV options like the Pulse.

Check out the full press release below and let us know in the comment if the new VIDAA Hisense smart TVs have piqued your interest.

"Hisense has boldly re-invented the concept of Smart TV with the VIDAA series. By combining a sleek and elegant look with the most intuitive UI and innovative remote control, our television is no longer just Smart – it's simply brilliant," said Jonathan Frank, Vice President of Marketing, Hisense USA.

Hisense is providing the global consumer electronics community and end-users across the world with the best-balanced coupling of connectivity, functionality and image performance with the VIDAA series. Users can easily navigate content experiences and view them uninterrupted as they slide into view. This new type of user interface was designed to align with the passive nature of the 10-foot, lean back experience, which favors a consumption-friendly experience over complicated interaction.