We already know that Google has been on a campaign to firmly integrate as much of its services with Google+ as it can. The next one on the list: Gmail. In fact, as of now, things just got a whole lot easier for Gmail users who are also big users of Google+. The newest update to Gmail that will be rolling out to users over the next couple of days will now let you send emails via Gmail to people on your Google+. How is this different from things before? Well, before this update, you couldn’t choose a Google+ contact as a recipient when composing a new email. You could see a whole list of varied information relating to G+ in your Gmail contacts list though, like searching for emails by circles. Google has also started rolling out another update to Gmail that allows the auto-show images feature, which was previously available to the web version of Gmail from your PC.

This G+ integration feature bodes well for Gmail and G+ users, as there are many people who choose not to share the email information on their profiles. They might have tons of people in their circles but only allow a select group of people to actually see the email information. This new feature will allow you to see and select anyone in your circles when composing a new email, and in doing so you are opening up the visibility of your email address to the people you’re sending an email to. You won’t however be able to see their information until they respond back, or email you first. This type of setup makes it possible for things to stay as personal and anonymous as one would like but gives you an easy way to change all of that should you decide to open up a little bit. 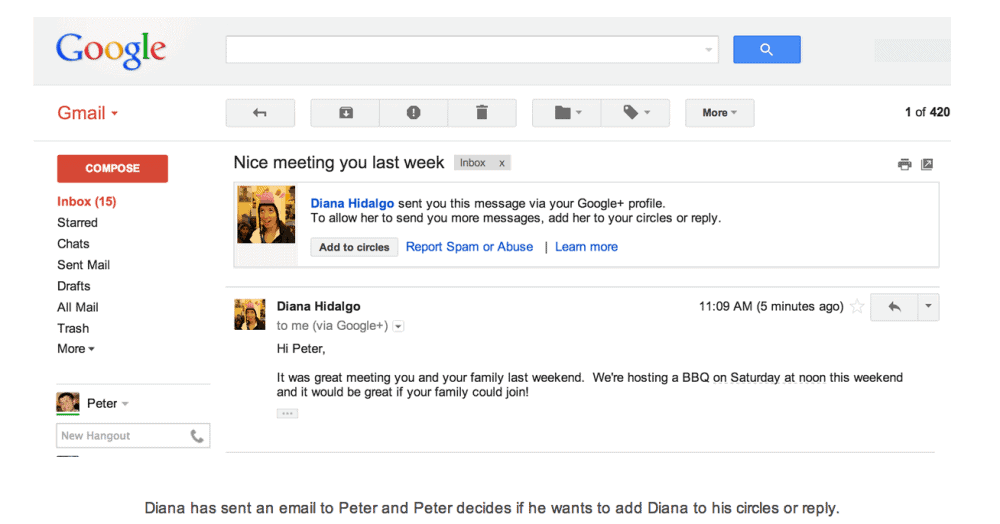 In effect, you can say goodbye to having to message someone for their Gmail contact info. Google also made sure to mention where exactly these types of emails from G+ goers happen to end up. If the person you’re receiving an email from is in your circles, then it’ll go directly to your primary inbox. If not, than it will end up in the new social tab with every other social related email. You know, the tab that has emails containing every single response to something you +1’d or commented on? Yeah that one. While it might be hard to resist the urge to just wipe that entire tab clean, it might benefit you should you end up getting emails from someone who isn’t in your circles. Let us know what you think about the new update and feature of Gmail in the comments.