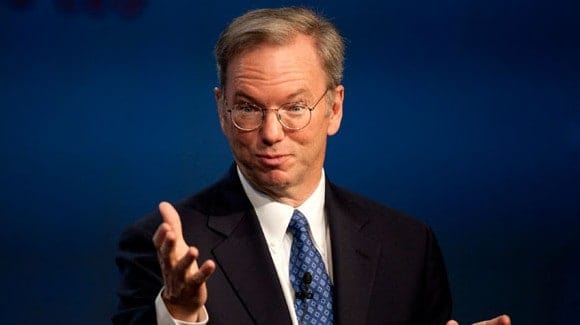 Many people were upset when they heard about the NSA’s retrieval activities concerning Google data. Most notably, Eric Schmidt and other high level Google executives. Schmidt says that him and other high level executives were completely unaware of the data tapping going on, and that they were “literally outraged” that such a thing was happening. He goes on to say that even if he and other executives had been briefed, they wouldn’t have been able to be forthcoming with the fact since they’d have known about it. The Guardian first reported about the activities happening last June, and Schmidt has been adamant about not having any knowledge whatsoever about what was happening, even though he and the other executives had the required clearances to be notified.

Google has taken steps since the privacy invasion to encrypt all or most internal traffic that goes on, so as to prevent things like this from happening in the future. Schmidt does admit however to making the choice to not see any requests filed by the NSA for data, because he did not want to be constrained by any rules. He also mentions that it would have been illegal to let the public know about any of it, even if he and other execs had know in the first place. It makes sense from a company standpoint, for Schmidt to avoid obtaining such knowledge as it could have the potential to put him in a difficult position with the public. He quoted in regards to seeing the NSA filing requests that “There’s a team of attorneys who see them.” He further made statements in regards to severity of the data tapping committed by the NSA, saying that the problem wasn’t as serious when compared to the issues in countries like China, with the strong censorship laws they have in place over the usage of the internet.

Although the censorship in China is heavy, Schmidt says that he thinks they won’t be able to censor their citizens effectively forever. Because of social networks such as Weibo and Wechat, both of which have large amounts of subscribers ranging in the hundreds of millions,(close to or around 300 million each) it will be hard for the country to keep a lid on Internet traffic the way that they have recently and in the past. With that many people online, he says “You can’t heavily censor that many people all the time. They don’t understand the power of empowering a hundred million Chinese, no matter how brutal they’re going to be with the bloggers.” Let us know what you think about Eric Schmidt and claims that other executives had no knowledge of the NSA’s activities in the comments.