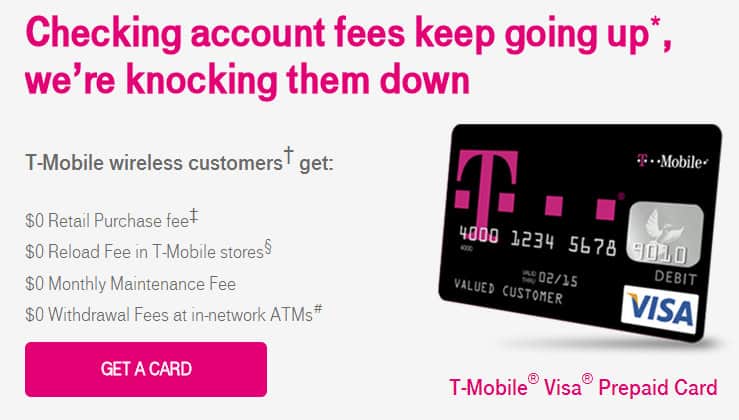 While T-Mobile hasn't exactly skyrocketed to the top of the US Wireless Industry, it's pretty safe to say that they've climbed the ladder nice and steady since they became, the UNcarrier. It seems that changing the way we think about our wireless contracts and phone upgrades just isn't enough for the magenta company and now, they're taking on banks. Well, they're not taking direct aim at banks, but their new prepaid visa card is what you could call a warning shot. Mobile payments would probably be a more appropriate way for the UNcarrier to go, but with the industry defiant to choose a standard, it seems a visa card is the smarter way to go.

So, what makes T-Mobile's offering any different? Well, they're banking – get it? – that lower fees will bring people into the T-Mobile brand and while fees hit record highs last year, T-Mobile's prepaid visa card isn't exactly "free", either. When checking in under $300 you'll have to pay a fee and "out of network" ATM withdrawals will cost you $2 as well, not dealbreakers certainly, but T-Mobile's offering isn't the savior of checking accounts it might first look like. Speaking about the new prepaid visa card, CEO of T-Mobile, John Legere, has this to say:

"We've already transformed how Americans use and pay for phones, tablets and wireless service; why stop there? Millions of Americans pay outrageous fees to check cashers, payday lenders and other predatory businesses – just for the right to use their own money. Mobile Money shifts the balance of power for T-Mobile customers and keeps more money in their pockets"

Folks interested in the new service can register for a card today and of course, T-Mobile customers will be getting a slightly better deal. Mobile Money is all about staying connected wherever you are and as such, depositing at a T-Mobile store is free and subscribers get a lower fee-structure overall. Mobile apps will be available to better control your money as well, making those smartphone users on T-Mobile the perfect candidate for such a thing. This is a strange place for T-Mobile to focus new efforts, but it's all part of the brand and those that rely on their wireless service could see this as a great alternative to traditional banking.