Smart houses are a natural next step for the world to make. We have already seen what Samsung is working on as well as a few others in that department, turning your smart devices into even more of a necessity. The only thing we are waiting on, is a line of household appliances that we can connect to and control from just about anywhere. Belkin is working hard to make sure their appliances are the ones we look to as innovators and firsts. So with that in mind, Belkin introduces the world to the first, smart slow cooker.

The Belkin Crock-Pot WeMo Smart Slow Cooker is one of a few different appliances that Belkin is producing in the WeMo line. If you are unfamiliar with the name WeMo, it is simply Belkin’s way of helping us reach our goal of an entirely smart house. Providing us with everything from outlets that are connected, to baby monitors, and now, they are venturing into our kitchens. 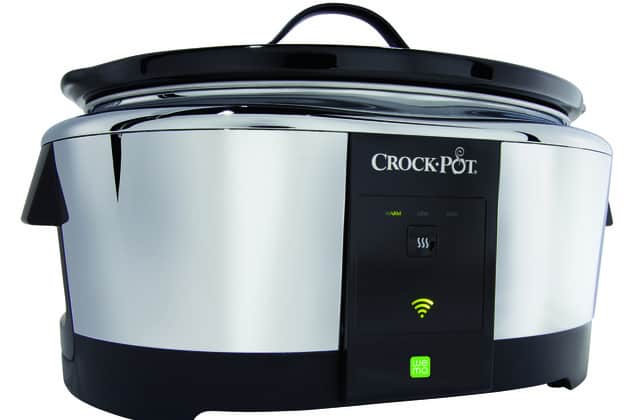 The Belkin Smart Slow Cooker, will allow you to control everything from your smartphones or tablets. Easily turn off the appliance while not home or just in another room, even change temperatures and monitor cooking times. Keep in mind, using a slow cooker, means a lot of time waiting or monitoring the cooking time. Sometimes emergencies come up, or you just don’t want to sit around all day while waiting for your meal to cook. No longer a concern, since you can now turn off or down your slow cooker while in line at the grocery store picking up the ingredients for the side dishes you forgot.

The slow cooker by Belkin is going to be available in Spring 2014, and for only $99, it’s should be an easy decision for the tech forward cooks out there. However, Belkin isn’t stopping there, most likely not until your entire house is equipped with smart appliances. Also coming soon, is the Belkin/Mr.Coffee Smart Coffee Maker, and a Smart Humidifier. Turning your kitchen slowly into a Smart Kitchen, and eventually, your house into a Smart House. No word yet on if these devices will work with Samsung’s Smart Home app, but it isn’t far fetched to say soon, since Samsung is looking for third-party help when it comes to appliances.