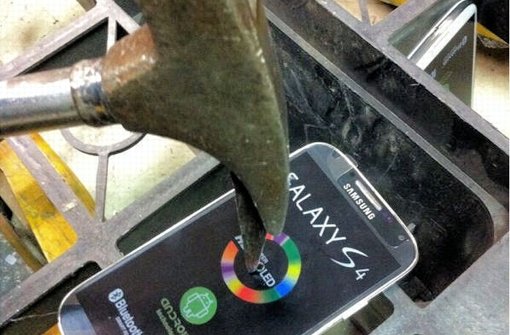 When a device becomes as successful as the iPhone or the recent Galaxy S4, we all know that in a factory somewhere in China – or anywhere, really – clones of these devices are going to come flying off of a conveyor belt, ready to be made available the world over at much lower costs. This sort of practice is pretty common in Asia, mostly because of how much big brands like Apple, Samsung and company charge for their devices. As well as this, availability is an issue too, both of which are caused – paradoxically – as a direct result of fakery and counterfeiting on a mass scale. This is just how it is in China and parts of Asia, but Western Europe? Where Samsung devices are readily available for reasonable prices? That's something we don't quite expect, at least not on the same scale, anyway.

According to German website, Stuttgarter-Nachrichten, 250 fake Galaxy S4s were confiscated at Stuttgart airport and promptly destroyed at the scene. In fact, the above image is apparently from the scene, that we can't confirm. The phones were apparently hidden away inside of a container that was labeled to contain $2,000 worth of cable, which obviously turned out to be false, as counterfeit Galaxy S4s were found inside. We're not just talking about a Chinese manufacturer making a device that looks similar, either. This is more of a group of people bringing in direct ripoffs in order to make some money on the side, presumably. It's sad to see, but this is hardly surprising.

With the Galaxy S4 proving to be one of the most popular smartphones in the World, it's hardly shocking that cheaper look-a-likes are making their way to all corners of the globe. This sort of thing probably happens on a regular basis throughout Europe, on varying scales. Just as counterfeit iPhones were rife – and still are – in most of Europe, the fake Galaxy S4s are here. If you've ever had an experience with such a device, shout out in the comments below!