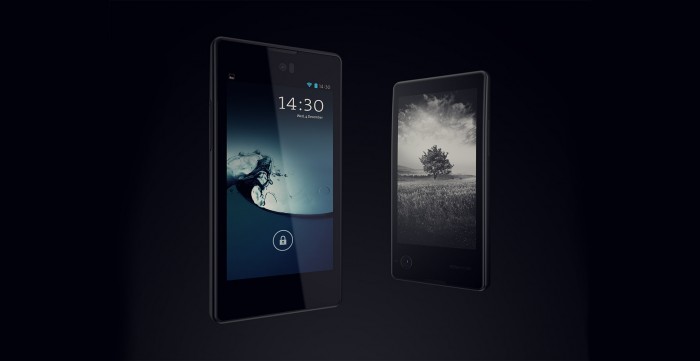 The YotaPhone has been something we've been hearing about for roughly a year and now, it's finally available. No longer is the device something that's still coming to market, it's finally here. Of course, that only depends on where in the world you are, with the device only available in parts of Europe right now. However, the device is said to be spreading to places such as the Middle-East, the UK and the rest of Western Europe shortly. Today, the company officially unveiled their device on stage.

The internals of the YotaPhone haven't changed much since last year, there's still a 1.7 Ghz Dual-Core CPU from Qualcomm, 2GB of RAM, 32GB of storage, 4G support, a 13-megapixel rear-facing camera. Of course, the same 4.3-inch 1280 x 720 LCD and 4.3-inch 640 x 640 E-Ink displays are here as well. The battery is only an 1,800 mAh cell but, the main idea of the YotaPhone is that you're going to be using the rear E-Ink display for glanceable information, thus saving on battery life.

The rear display of the YotaPhone has been designed so as not to become a gimmick, it's extremely useful and it can of course, make for an excellent reading experience. Pertinent information such as maps, notifications and schedules can be applied to the E-Ink display and then drain no further power from the device. While the YotaPhone mostly runs stock Android 4.2.2, they're really done some great things with software to get as much information to the rear display as possible. From a single hub, you can send a myriad of different info to the e-ink display, such as text messages, maps, train times, whatever it is that you need to get access to while on the move.

Packing all of this into such a device is no mean feat of course, and the YotaPhone is a little thicker than most other phones and we'd suggest that this is more of a device for those that are constantly on the go. Rather than those looking for the latest and greatest in smartphones. The device is now available in Russia, Germany, France, Austria and Spain directly from YotaPhone. From there it will come to the UK, some other European countries such as Czech Republic, Greece, Cyprus and the UAE in January 2014. In the EU, the YotaPhone is priced at â‚¬499.