Skip to content
Trusted By Millions
Independent, Expert Android News You Can Trust, Since 2010
Publishing More Android Than Anyone Else
7
Today
157
This Week
161
This Month
161
This Year
118137
All Time If I were to tell you that you could upgrade your phone just like you upgrade a computer, would you be excited?  Let’s say you like the size of your screen and don’t want one any bigger or smaller, but your phone is getting a little slow so you’d like to upgrade it and make it fast again.  Or how about that low-resolution camera you have on your phone without something cool like Optical Image Stabilization, and now you want to upgrade it to a 16 megapixel one with OIS?  All this stuff is possible, and more, with the new concept of modular phones.  We first saw this concept back in September when Phonebloks announced their Kickstarter project to build a new phone that does just this.  Of course that was an extremely lofty goal, as not just anyone off the street can design and get their own phone manufactured, much less one with the number of parts and complexity of the Phonebloks concept.

Thankfully Motorola came around not long after and announced their own modular project called Project Ara, which had been in development for the past year.  Now Motorola isn’t the only one to be working on a modular phone apparently, and Xiaomi, the Chinese manufacturer that former Android VP Hugo Barra left to join back in late summer, is also working on a modular phone as well dubbed the “Magic Cube.” 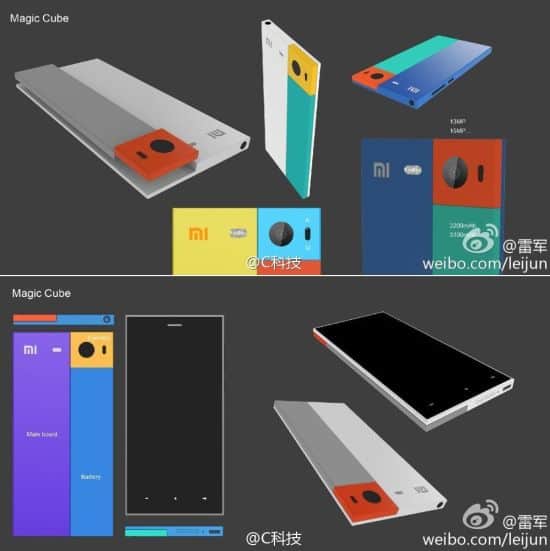 The images you see above were added to Xiaomi Founder and CEO Lei Jun’s Weibo profile, and have since been removed.  While Mr Jun didn’t include much info alongside the images, we can gather quite a bit of info from them.  First off it looks curiously quite a bit like Motorola’s Projecct Ara and the Phonebloks concept, which is a fantastic thing.  Modular phones are likely going to be huge when they eventually hit the market, and it’ll likely help lessen the stigma that phone upgrades carry with them, and even help with the cost of smartphone ownership as a whole too.  A company like Xiaomi working on such a project could help bring this concept to places around the world that Motorola might not normally sell to, and with Xiaomi’s big name in China and the surrounding countries, this concept could really get a big foothold very quickly.

The only downside that can be seen in these images is that this phone is a lot more simple looking than either Project Ara or the Phonebloks concept, as it only has 3 to 4 parts that are able to be switched out, whereas the other modular phone concepts have somewhere around 8 to 10 pieces that can be switched out.  This obviously limits the amount of customization possible, however since these images have been pulled from Mr Jun’s Weibo account, there’s no telling exactly how customizable these actually were; this could just be two of many different images showing many more options.  Regardless this is pretty exciting stuff, and we’ll be watching this project and the other modular phone projects like a hawk.