On Monday, Toshiba made an announcement before they left for their Christmas holiday. They announced a new dual 5MP camera unit which also has a companion chip. This new module is meant for smartphones and tablets, and I’m pretty sure Toshiba will be showing it off at CES in a couple weeks. The press release from Toshiba stats that sampling availability starts on January 31st, 2014, which means we probably won’t see it in any smartphones or tablets until the end of 2014 at the earliest.

This new product is supposed to be pretty unique. It’s incorporating twin 0.25-inch optical format 5-megapixel CMOS camera module, which is capable of simultaneously recording both image and depth data. The companion chip we mentioned earlier, will use the recorded depth data and then apply it to objects in the image, in order to produce something of a stere0-3D shot. The functionality such as digital focus tweaking and extracting or erasing entire objects from the image has also been thrown into the mix, making the “TCM9518MD” twin camera unit very interesting. 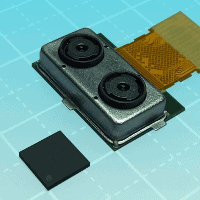 The twin 5-megapixel camera unit will be generating 13MP images, through upscaling. Toshiba is also touting this as advantageous, as this does allow for the camera to be made thinner than currently available 13MP sensors on the market. Which should allow for thinner smartphones with better and more megapixel cameras. Although, I’m not sure I want a thinner phone. I’d rather it be a bit thicker with a bigger battery, how about the rest of you?

It’s nice to see Toshiba coming up with stuff like this. I honestly, didn’t expect this from Toshiba, but more from Samsung or even HTC. Considering Toshiba hasn’t done well in the tablet market and don’t really have any smartphones on the market either, at least not in the US. It’ll be interesting to see how this new module works on newer devices, and how many OEMs actually decide to use it. Although, I’m sure Toshiba will use it in their upcoming smartphones and tablets.