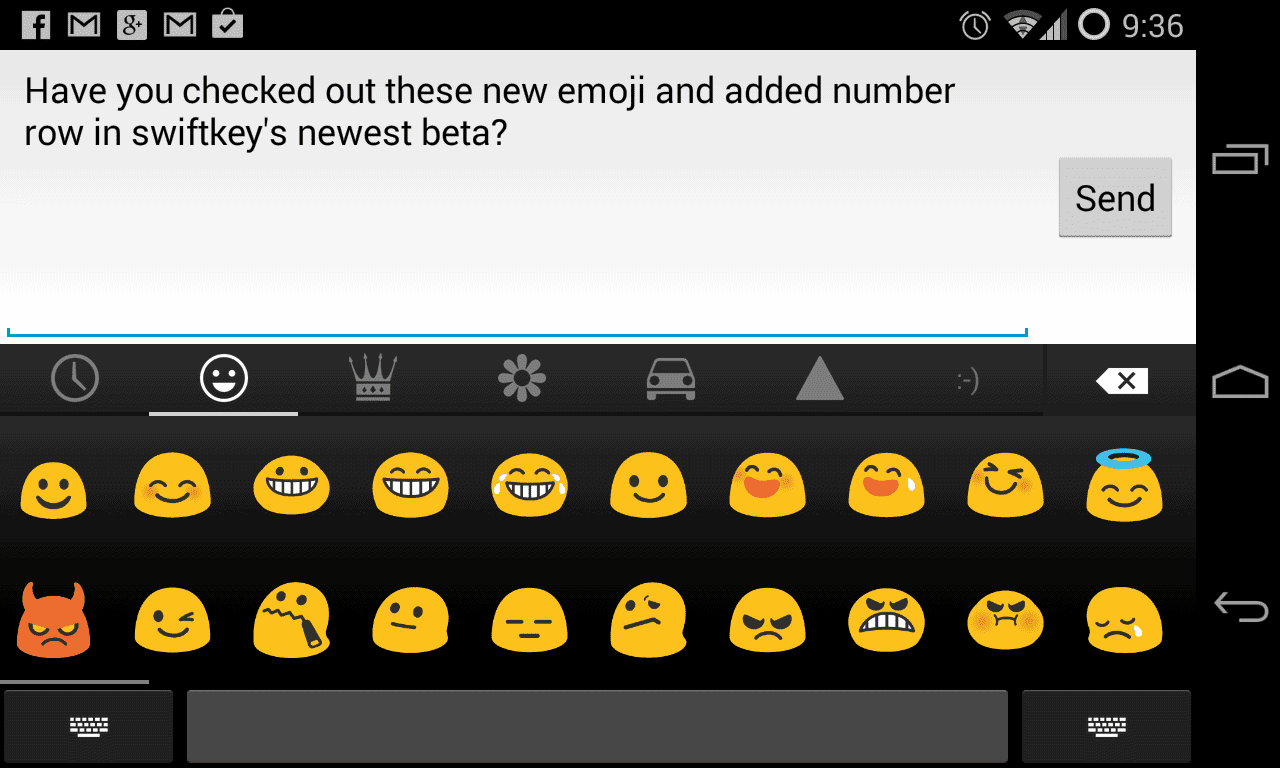 Everyone Knows that typing on a smartphone can sometimes be a cumbersome mess that leaves little to be desired. The experience is so distasteful for some, that they want to denounce using smartphones altogether for this one thing. That's where Swiftkey has come in to save a lot of people from hurling their smartphones into the nearest river. The wildly popular aftermarket touch keyboard app for Android makes typing on the touch screen twenty times easier. The normal Swiftkey app costs $3.99, but it is easily one of the best purchases in the Play Store that any person can make, and is one of the must have apps for anyone using an Android phone without a physical keyboard.

Even though Swiftkey costs money, every so often they put out a beta version of the app that allows users to download and install it for a trial period of time to test out new features and stuff in the latest update. The newest Swiftkey Beta has just hit the web, and along with it comes 500 different Emoji types, and an optional new number row. For those of you who may not know what Emoji are, cause lets face it they sound weird, Emoji are basically the same thing as emoticons. What are emoticons? Quite simply put, just more animated looking smiley faces. They're quite fun to use really and can liven up a message much more than using the regular standard fare of smileys.

The Emoji are separated into 5 different categories which contain 100 each. The different categories are broken down into people, objects, nature, places, and symbols. If you're wondering why not just have them all in one page, it's because finding the Emoji you want is a lot easier this way. That's not even the best part though. These are the same Emoji you can find inside the Google Hangouts app, but since this is Swiftkey you didn't think they would just hand you a bunch of Emoji and leave it at that did you? No sir/ma'am! They have taken it a step further and corresponded the Emoji to words, so if you type a certain word you'll be given options of the different words in the group as well as the Emoji to choose from. If you type that you want "pizza" for dinner, you'd be given the word pizza along with some others as choices, but you'll also notice that the pizza emoji will now pop up.

Swiftkey has always done what it does best and learn from you to make typing easier, and as it continues to learn from you, more Emoji will begin popping up as options in the predicted set of words that show up when you type certain words. That's pretty slick of Swiftkey. The other piece of the update in this newest beta version is the optional number row pad that you can choose to add in. That's right, no more switching between sub-keyboards of numbers and letters or long-pressing the corresponding letter to whatever number you need. Just add in the number row and that's it. If you have been looking for a way to make typing a breeze with your new smartphone, or perhaps an old one that you just hate using, give Swiftkey's newest beta a try. You shan't be disappointed.