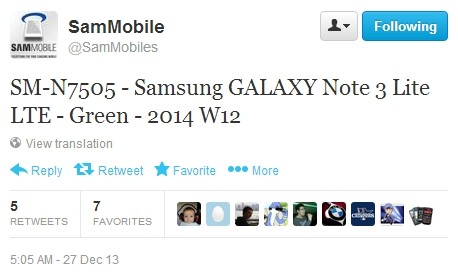 Reportedly, Samsung is looking to manufacture about 1.5 million Galaxy Note Lite units between now and February 2014. So obviously they aren't looking to sell a whole lot of these since Samsung has sold 10 million Galaxy Note 3's in just two months. With them manufacturing 1.5 million units by February, that highly suggests we'll see an announcement at Mobile World Congress in February in Barcelona, Spain. But at this point, anything is possible. There's also rumors that the Galaxy Grand Lite is being announced at Mobile World Congress as well.

How many of you are looking forward to Samsung making the Galaxy Note Lite go official in the next couple of months? Let us know your thoughts in the comments below.