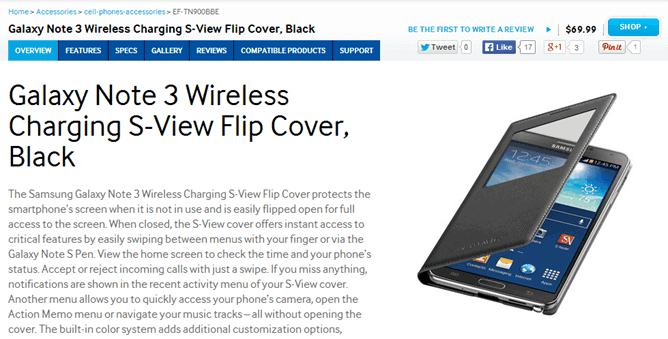 Samsung has quite a few accessories for their devices, especially the Galaxy Note 3 and the Galaxy S4. They've even got some wireless charging back covers, so you can enjoy Wireless Charging on your Samsung device, like those of us with the Nexus 5, Nexus 7, or the HTC Droid DNA. Today, Samsung finally put the S View Flip Cover that has wireless charging compatibility on sale on their website. It's going for just $69.99. It's available in both black and white.

For those that don't know about the S View Flip Cover, it allows you to see the time and your notifications through the little window. Instead of waking up your entire device. It's kind of like Active Display on the Moto X, but you need this case to do it. It is kind of cool, as I used it on the Galaxy S4 (and Yes, I know it's been improved since then), but I didn't really use it that much. I didn't like the flip aspect of the cover. But that's just my opinion.

There's a 50% off coupon code floating around right now, however, that will not work or this item. So you'll have to pay the full $70 for it. We've got the links below for you.