A new Galaxy smartphone, the Galaxy Win Pro has arrived on the scene, but don’t get excited, it’s only being released in Asia and it’s decidedly mid-range. Samsung never misses an opportunity to flood the market with devices options at almost every price point and screen size, so this shouldn’t surprise anyone.

The Galaxy Win Pro is a sequel to the Galaxy Win, which you’ve probably also never heard of. It showed up on Samsung China’s website (translated link) and appears to be available at local stores.

This device bears a striking resemblance to the Galaxy S4, and if you spotted one in public, you might be hard pressed to tell the difference. That was probably quite intentional on Samsung’s part. Sadly, on the inside, the Win Pro is a lot less impressive: 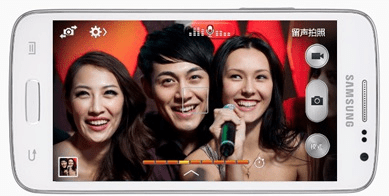 That screen is likely the saddest feature of the Galaxy Win Pro, but at least it’s better than the original Galaxy Win, which was only 480×800. There’s no word on internal storage or RAM in this device, but the original Galaxy Win had 8GB of storage and 1GB of RAM, and since this new one is still a mid-range device, it’s probably safe to assume the same specs here.

This one will very likely stay in Asian markets and never reach North America or Europe. But don’t worry, Americans, we have plenty of low-cost, mid-range Samsung devices to choose from ourselves, like the Galaxy Ring on Virgin Mobile, or the Galaxy Amp on AIO Wireless. Both have very similar specs to the new Win Pro, and both will likely sell very well this holiday season.

Samsung has worked very hard to ensure that their wide range of Galaxy devices both cheap and expensive are available everywhere. And as long as they keep making cheap devices, consumers will keep buying them. Samsung is obviously doing something right, so it seems appropriate that their newest device is called the Win.