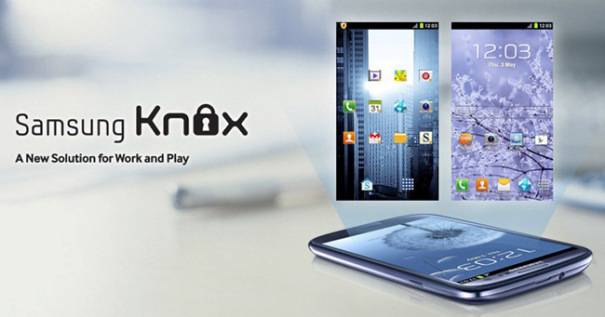 Samsung is known for their innovation. Especially this last year or so. They have made a big push with their Enterprise compatible KNOX security solutions, and for their efforts they were named as the No.1 solution for Enterprise Security by ABI Research. Nine smartphone manufacturers were tested across eighteen different categories according to BGR, and Samsung came out on top, beating out companies like Apple, Blackberry and Nokia. In an interesting turn of events, (and actually ironically comical if you think about it) a massive security flaw was discovered in Samsung's KNOX software on the exact same day that they were ranked No.1. The flaw was discovered by two security researchers from Ben-Gurion University of the Negev in Israel, and was stated that if given the opportunity, 'Hackers' could intercept the exchange of data between the Galaxy line of phones that use KNOX. This could have potentially been a huge problem if not caught. Samsung of course denies that the vulnerability even existed.

According to ABI's Analyst Jason McNicol, Blackberry is still considered the 'Gold Standard' when it comes to security, but because Samsung was able to win in enough categories, it was able to make its way to ranking No.1. He states that other companies like Apple were awarded the No.2 ranking with Blackberry landing the No.3 spot and Nokia trailing behind Blackberry. He also notes Blackberry will be battling it out with Nokia for the No.3 ranking going forward. He states that

Despite setbacks due to struggles between Apple and themselves, Samsung was still able to focus enough on its security solutions that it has come up with for companies to earn it the top ranking in mobile security offerings. As long as Samsung can continue to increase their focus on Security and prevent holes in their security software like the one listed above from popping back up in the future, they can remain a dominant force in Mobile Security, which is something they have been striving for.