Pebble has just made an exciting announcement that should help to advance their status as a legitimate smartwatch alternative for Android – they just opened up the Pebble Developer Portal.  Obviously, it will only be open for Developers at this time, but they said they want to open up the Pebble Appstore to the public sometime in 2014. This PAGE on Pebble’s website should answer all the questions a developer may ask and also tells you how to get registered and started in the program.

It will be a first of its kind, giving Pebble owners a one-stop place to search, browse, and install Pebble watch faces, and it will have links for the apps to the iOS Appstore or the Google Play Store – but this will be the place to start your Pebble app search.

The Pebble Appstore will include watch faces, but also six app categories, and each category will feature a selection for the best apps as well as a listing for the new apps.  For Pebble, this will be a huge step in furthering the sales of their smartwatch as well as help keep current customers from jumping to another brand. Their Appstore will follow the Play Store and categorize the apps into the following areas to help in your search: 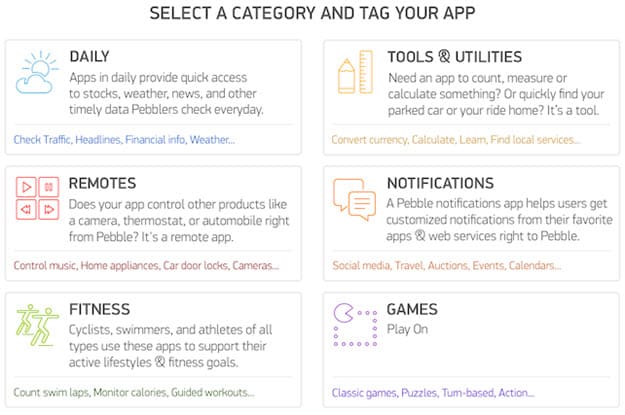 Pebble was launched as a Kickstarter idea in 2012 and was one of the most successful “crowdfunding” campaigns to date. While designed for the 21st century, the Pebble watch is still a minimalist design – for today’s kind of fashion scene.  The Pebble also changes with your mood or the years with beautiful watches that can be downloaded to suit your tastes.  The Pebble connects to your Android or iOS device via Bluetooth.

They were first launched in the Best Buy stores this past summer for $149, then expanded to AT&T Stores in September for the same price, and now you can get them at Amazon for only $120 with Amazon Prime.

Let us know on our Google+ Page if you sport a Pebble watch and what you think about it – are you still on the fence about buying a smartwatch, or are you just waiting for the right one to come along?