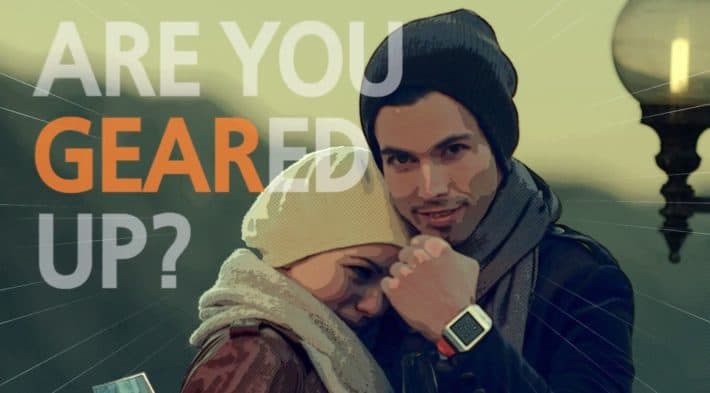 Samsung just published a new video ad for the Galaxy Gear smartwatch which shows how you can use it to impress cute girls on ski slopes. The ad actually does a really good job of showing off the Gear’s features and you’ll probably come away from the ad wanting one, or at least looking at it differently.

The ad introduces us to three characters at a ski resort, two guys and one girl (Aimee). Both guys appear immediately interested in getting the girl’s attention, but (naturally), the guy wearing the Galaxy Gear (Jack) is immediately successful as she is immediately impressed with the gadget’s features. She even willingly gives her phone number when Jack tells her to just speak her number aloud. The unnamed other guy hurries to get his phone out of his pocket to copy down her number, but sadly drops it off the ski lift as he fumbles with it.

The story progresses with the sad guy without a Gear continuing to fail at gaining Aimee’s attention at all while also generally making a fool of himself.

This ad does a pretty good job of highlighting the Galaxy Gear’s standout features, even though it’s definitely over-the-top in a few ways (seriously, would girls be impressed if a strange guy was taking their picture on a ski slope?). It’s good to see an ad that doesn’t just mindlessly bash the competition, but rather shows the merits of the product being advertised, and this one does just that.

Features like voice commands, hands-free speakerphone calls, and of course the camera are all demonstrated with real-life examples. Later in the ad, we get to see the “phone locator” feature that rings the phone paired with the watch if you misplace it, as well as the Gear’s ability to remotely control music playback from the watch. All of these are features that even average people would likely find useful.

Even if you’ve never been interested in a smartwatch before, this ad might just pique your interest. The watch may not perform quite as fast and perfectly in real life, of course (check out our Galaxy Gear review), but it’s still an interesting product. Sadly, though, the Gear remains exclusive to Samsung devices. If you want one, you’d better be using a Galaxy S3, S4, or Note 3. If you’ve got a Motorola, LG, HTC, or any other device, you’re simply out of luck. Samsung doesn’t appear to have any interest in making the Gear compatible with other devices. They’re clearly hoping you want the Gear badly enough to also buy a new Samsung phone.

Check out the ad below. Sure it’s a bit cheesy, but what do you think? Are you more interested in the Gear after watching it?