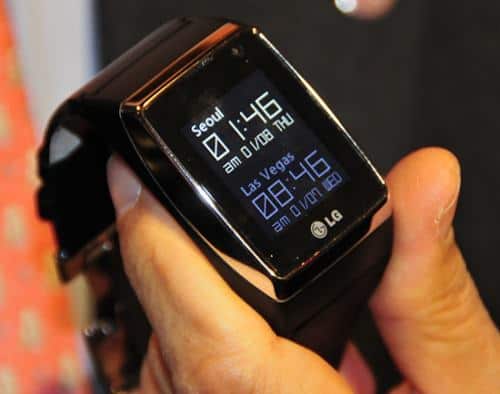 2014 is shaping up to be the year of the Smartwatch and unsurprisingly, it looks like Mobile World Congress is going to be the center of it all. With Samsung, Sony and of course the Pebble already delivering pretty comprehensive experiences, it's going to be interesting to see how other industry players approach this emerging segment. We know that LG is looking to get in on the game and we're pretty sure that they'll be trying to do one better than Samsung and their Galaxy Gear. Now, we might have some information as to just what LG plan on doing and what these devices might be called.

According to PhoneArena new reports have surfaced in Korea that hint at LG launching two separate devices. One aimed at a competitor to the Galaxy Gear and all other smartwatches and another aimed at taking on the FitBits and Nike Fuel Bands out there, both called "G Arch" and "G Health", respectively. Creating two separate brands and devices actually makes a lot of sense for LG to do, after all the Smartwatch is still in its infancy and there's no telling what the "perfect" blueprint is right now. However, as Nike has proven, fitness accessories can prove popular and it's hard to create a smartwatch that does everything. As Samsung have learnt with the Galaxy Gear, it can be done but, it pushes prices up and that often turns people away.

No matter what though, details are pretty scarce right now and as 2013 comes to a close we might hear a little more. We doubt that LG is going to produce anything that doesn't leave up to their now very high standards so, we're intrigued to see what LG come up with in 2014. As with Samsung, this isn't the first time that LG has gone down the wearable technology route, launching the GD910 (pictured above) in 2009 so, it's not as if LG can't do it. Let's just hope that they've learnt a lot since then.