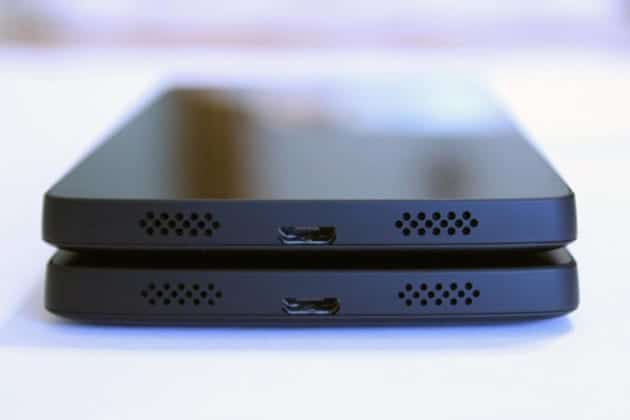 When the Nexus 5 finally launched, a lot of people were very happy with it – us included – but, as with any new device fresh off of the assembly line there were some niggles. Chief among these "niggles" was the apparently ratting of the power and volume buttons on the device. My own Nexus 5 has a slight symptom of this and the power buttons is more than a little wobbly, but it's nowhere near as bad as some users have been reporting. Now, LG have tweaked the production of the Nexus 5 a little bit, as they did with the Nexus 4 of last year, to make some much needed adjustments.

Those rattly buttons have now been stiffened up and the speaker grill at the bottom of the device are now quite a bit larger, as you can see in the above photo. We're not sure how much difference that'll make to the overall sound quality of the Nexus 5 but, it can't possibly hurt, either. Needless to say, this is always a good sign to see manufacturers tweak the Nexus design, it shows us that the Nexus is not a cheap flash sale device that it once used to be, instead they're now very real products for very real people.

Tweaks like these have been reported by users at XDA but, it might not all be good news as there's word these new devices could have a slightly more "yellow" display. Of course, when more users get a hold of this "new" version of the Nexus 5 we'll be able to tell a little more. There doesn't appear to be any change to the device's model number, which is hardly surprising but, the serial numbers on these devices could probably give us some indication as to whether or not they're the "new" or "old" version of the Nexus 5. If you've had a similar experiencing, returning a Nexus 5 to get a slightly tweaked one back let us know in the comments and don't forget to come see us on Google+!