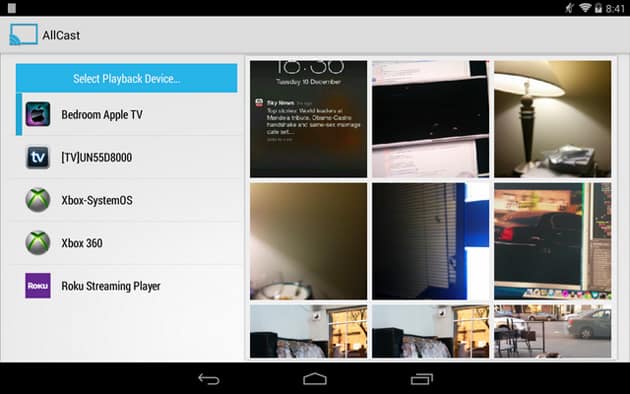 Allcast fans, Stream junkies, and media lovers alike, it's time to open up the Play Store and either update your apps, or go and download Allcast as it is now out of beta. Allcast is definitely one of the best apps out there for streaming local media, since it allows you to stream to just about any device you could possibly own, minus the Chromecast of course. Besides that, you can stream media to Samsung smart TV's, just about anything that has DLNA, WDTV's, Apple TV, Roku boxes, and both the Xbox 360 and the Xbox One, as well as Google TV now too.

For anyone who was looking for a good streaming app, but just haven't found a way to access your local media on a handful of the different devices one might own, Allcast is a nice and easy way to cast your local media(Videos only so far, music support coming soon as stated by Koush in the apps description), and will hopefully receive support for Chromecast soon, but that ultimately depends on Google.

Since the app is now out of beta, it would seem that to get the entirety of Allcast's features you need a premium license key, which will cost you $4.99 if you want the capability for video streaming without limits. Although it comes as a tad bit of a surprise that the premium key arrives as soon as beta ends, in the long run its worth it. What remains to be seen is whether or not Koush and the Clockworkmod team will decide to drop the price of the Allcast premium license key app after sometime. Without the license key, you can still use Allcast, although it seems that most are saying that the video length is only lasting around 60 seconds or so when it comes to how much streaming you can do. So in short, don't expect to use Allcast as a viable streaming option unless you plan to buy the license key, or in case you plan on only streaming short clips of random videos.

Its also worth noting that we haven't tested the Allcast app's reported limited length ourselves to see if we get the same result, but it seems that more than one person has been limited to a small amount of video when trying to stream. Our overall thoughts on the app? Allcast looks like a great option to allow you access to your local media. Is it worth the price? Considering it does what the newly Chromecast supported "Plex" app does without a monthly fee(just not to Chromecast yet), we'd say you might wanna just break down and pay for it. Has anyone been looking forward to this app leaving beta? Who is already using it? Let us know what you think in the comments on our G+ post.http://youtu.be/zx-v4QSQmU4