It seems that someone has told HTC that releasing more color options on their latest devices will ensure better sales, or maybe help them battle Nokia in the patent infringement lawsuits. HTC had unveiled their current flagship – the HTC One – in 18 karat gold for the 18th Anniversary of the MOBO awards. They also released the same device in an exclusive Blue shade for certain select markets, as well as a highly individualistic David Koma designed HTC One in black and silver pushes.

Now it seems the HTC One Max would be given a similar treatment by the Taiwanese manufacturer. HTC fans in their home-base Taiwan have been given another – probably exclusive – treat in the form of the Gold HTC One Max. The shade is being termed as “Amber Gold” by HTC, however it must be noted that the device does not boast of actual gold – the precious metal – being used in the housing anywhere. Instead the device comes wrapped in a light golden hued aluminum body. The HTC One Max was initially released in three color options – silver, red and black. 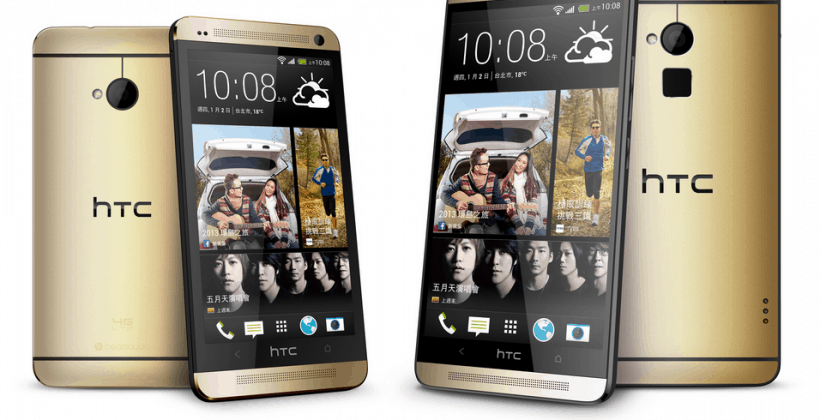 With the difference in color, the specifications and features of the device remain the same. The HTC One Max boasts of a huge 5.9 inch 1080p full-HD display which offers a fantastic ~373 pixels per inch (ppi) resolution, with a quad-core Qualcomm Snapdragon 600 processor clocked at 1.7 GHz, an Adreno 320 GPU with an ample 2 GB of RAM. Internal storage is available in 16 GB and 32 GB options, which can be enhanced further by the MicroSD slot which supports up to 64 GB. The device is equipped with quad-band 2G, tri-band 3G and quad-band LTE (4G) radios. The HTC One Max is powered by a 3300 mAh Li-Po battery which provides up to 25 hours talk time on 3G. The device is also the first from HTC to sport a finger print sensor on the back – just below the 4 mega pixels (MP) primary camera – which can be used to unlock the device or even to encrypt-decrypt documents. The device also sports a 2.1 MP secondary camera for video calls.

Though the chances of the Amber Gold HTC One Max hitting shelves in the US are rare, we believe in the adage “the more, the merrier”. Would you like to have the device in Gold? Do let us know in the comments below.