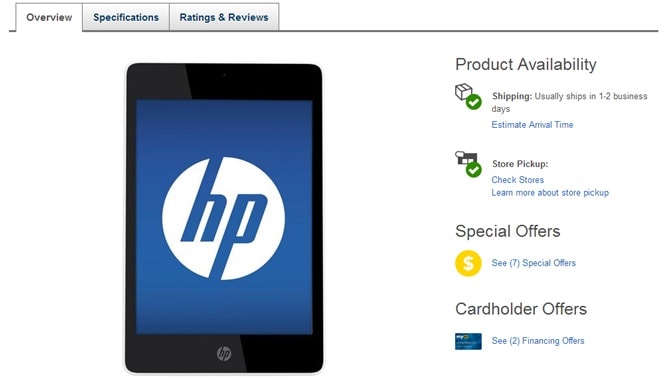 This year has been the year HP started becoming serious about Android tablets, and has already launched a few of them, while continuing to launch more into the market for the holiday season, too. The latest 2 tablets are the HP Slate 8 Pro and the HP Slate 7 Extreme, and both are coming to BestBuy for $329.99 and $199.99, respectively.

The HP Slate 8 Pro obviously comes with an 8" screen, a size that I'm hoping to see in next year's Nexus tablet, too. It's a tablet screen size that is becoming increasingly more popular, especially with most flagships phones these days coming with a 5" screen or bigger, making 7" tablets a little unnecessary. The screen has a resolution of 1600×1200, which isn't exactly as high as that of the Nexus 7, nor of the new iPad Mini, but it should be good enough. The resolution may seem a little strange because of its 4:3 ratio.

The device comes with a Tegra 4 processor, which is one of the fastest chips around right now, 1 GB of RAM, 16 GB of storage, and microSD support for further storage expansion. It also has an 8MP camera on the back, and an unspecified camera in front. It comes with Android 4.2, which is getting really long in the tooth at this point, because there's no good reason why a tablet launching this late wouldn't get Android 4.3. Hopefully, at least it will be upgraded to KitKat soon enough, and just skip 4.3.

The HP Slate 7 Extreme is more of a Nexus 7 2012 competitor. It has a 7" screen and an IPS panel with a resolution of 1280×800, 1 GB of RAM, 16 GB of storage and microSD support. However, its chip is much more powerful, because it's using Tegra 4, too. It may even be a better gaming device than the new Nexus 7 is. Unfortunately, it also comes with Android 4.2, so once again we can only hope HP has plans to upgrade straight to KitKat soon.

The two tablets seem a little on the expensive side to me, and there's definitely no sort of discount for holidays here, but they're not too bad either. HP still has some learning to do regarding how to make great Android devices at great prices, that also come with newer versions of Android, but we can only hope that's their objective for 2014.