The ROM Manager, Koush’ very popular app for managing and installing custom roms, has been pulled from the Play Store by Google, because apparently Koush was still using Paypal for in-app purchases, instead of Google Wallet. Google introduced in-app purchases with Google Wallet 2 years ago, so it’s not like he had an excuse about not doing it, and following Google’s Terms of Service.

Since this is the only way for Google to their cut from paid apps, and for hosting the app in their store and giving the necessary bandwidth for millions of people to download these days, it’s understandable why Google would be upset about this.

On the other hand I’m starting to worry that Google is selectively enforcing its TOS against anything that has to do with Cyanogen or other custom ROMs. They did it recently with CyanogenMOD’s ROM installer, too, although again they had a pretty reasonable motive for doing it, because the app wasn’t very safe for most users, and wasn’t completely finished either.

What’s strange though is that they gave Koush 6 weeks to fix this issue for another one of his apps, and he did it, and still had 2 more weeks from that, but they decided to just pull this app without any prior notification. 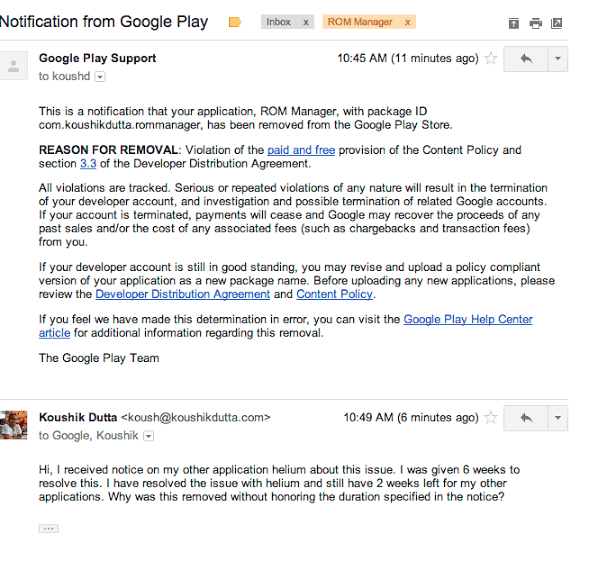 I could see why Google would want to become more aggressive against Cyanogen, because Cyanogen is an actual company now, and their custom ROM is basically no different than what Amazon is doing with Fire OS – a completely forked version of Android. There’s nothing wrong with that, though, or at least there shouldn’t be, since it’s Google who decided Android should be open source for anyone to use how they like (except their Google apps, obviously), but I think Google would prefer it if virtually everyone just used Android without trying to turn into an actual competitor of theirs.

Right now its still inconclusive if these recent issues have been just a coincidence, or if there’s an actual plan at Google to kill CyanogenMOD and other custom ROM projects, but it’s definitely something that we need to keep an eye on, in case Google decides to go overboard.