The year is coming to end, and while we cram many different holidays into one month, one holiday consist of a statewide countdown. New Years eve has many different versions of the countdown, from San Francisco to New York City. The interwebs however, have hundreds of versions of the countdown, and they come in the form of lists. That’s right, getting a jump on the lists is Google, who present their top apps and games of 2013.

So while you are sitting around waiting for grandma and mom to finish cooking the dinner, or for halftime to be over during the game, we turn to our devices for distractions. Maybe you are just tired of crushing candy, or destroying piggies with birds that just need some anger management. Either way, here are the games that Google thinks everyone should be playing on their Android devices.

Asphalt 8: Airborne is one of the greats for mobile racing, and is actually the only racing game that made the list. We also have some strategic games that make an appearance. Those games consist of Anomaly 2, Heroes of Dragon Age, Clash of Clans, DragonVale, Plants Vs. Zombies 2 and even The Blockheads. For those of us looking for a gory and running mission there is Into The Dead. If you don’t want the gore, there is Rayman Fiesta Run. Then the smaller categories come into play, with FIFA 14 by EA Sports, tackling the sports category, and lets not forget about the puzzles.

Rovio takes a break from the birds, and brings us Juice Cubes, a puzzle game that gives a nice break from candy. 10000000 is another puzzle game that made the cut, as well as Dots: A Game About Connecting, which is exactly what it sounds like, connect the dots. If you are looking for a unique spin on the puzzle game, Containment The Zombie Puzzler allows you to solve puzzles while surviving the zombie apocalypse. That brings the list to a close for 2013 game must haves according to Google. You may have played some of them already, but if not, than you still have some time to experience each one. Games are great, but Google also wants you to know what apps you should be using from 2013 as well. 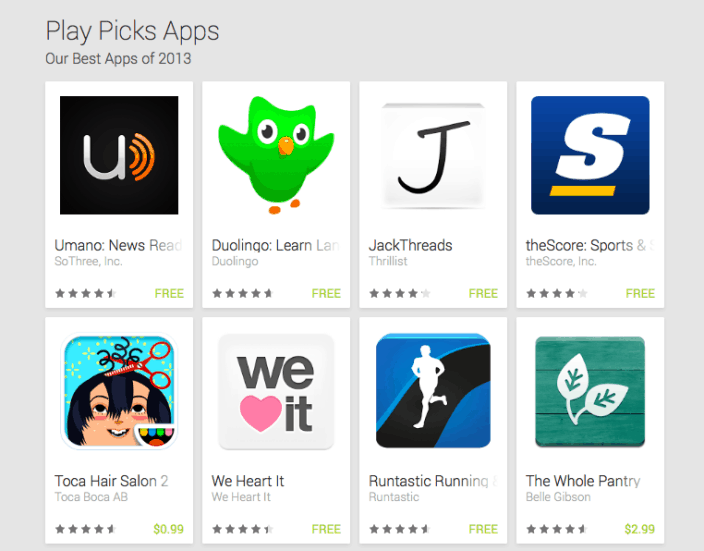 The list of apps consist of things that may help you in everyday life just to stay informed on things you care about. From News apps like Umango: News Read to You, the Score: Sports & ScoresCirca News, , and Sig Fig Stocks and Investments. To Lifestyle apps; Runtastic Running Fitness, The Whole Pantry, Wunderlust To Do & Task List, and Duolingo: Learn Languages Free. Google also wants to make sure we all stay inspired by using apps like We Hear It, and 500 PX-Inspiring Photos. These apps allow you to see many images submitted by users that are found to be inspiring and help get the wheels turning. Photos seem to be a major role in this list. We find a couple photo and video editing apps here as well. Magisto Video Editor & Maker, and the obvious Aviary Photo Editor. In the way of music, Tunein Radio is the only one there, and we also see Toca Hair Salon 2 on the list.

That completes the lists coming from Google. These lists won’t be the only ones hitting the web, so make sure you are ready for them. If you use any of these apps or games, do you think they have earned the right to make it on the list?