Skip to content
Trusted By Millions
Independent, Expert Android News You Can Trust, Since 2010
Publishing More Android Than Anyone Else
34
Today
122
This Week
765
This Month
6703
This Year
124224
All Time 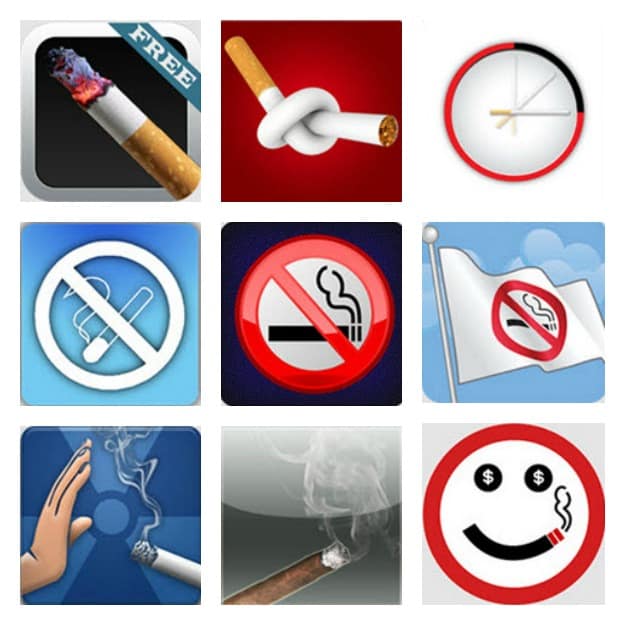 It is almost time for that New Year’s Resolution to stop smoking, so we thought we would pick ten Quit Smoking apps for you to try to stop that nasty habit – we even threw in one cigar app. Quite honestly, I am not sure how much an app will help in your quest to stop smoking, but then, every little bit helps. Most of these applications are statistic oriented and track your savings.  If nothing else it would be fun to try one and see if it does help – please let us know in the comments or on Google+ if a particular app worked for you. GOOD LUCK!

This app was used by a lot of people, many of which (9,315) Google+ it, but it only got a 3.8/5.0 rating, but you are actually “smoking” a virtual cigarette!  A pack of Locky Strokes shows up on your display, lift open the hard top, and then you can even shake the cigarettes back and forth in the box.  Then a lit cigarette appears on the display and you hold your smartphone up to you mouth and suck and blow into your microphone!  When it hears the sucking sound, the ashes brighten up and when it hears you blow out, a smoke ring appears…pretty weird stuff, but hey, it might just work.

This one calls itself “Europe’s No.1 Quit Smoking App.”  It has motivational and informative articles, an interactive section, a cost calculator, YouTube videos, and even has a hypnosis program.  The UI is colorful, but there is more reading than most apps, which is probably why it is not as popular.

This is a widget application “designed to gradually wean you from dependency on cigarettes.”  The application claims it will continuously adjust itself to you specific smoking pattern.  The graphics are extensive and it appears beautifully done, but whether it actually helps you quit smoking is another matter, but many users found it useful.

This application claims to provide you with the support you need when you quit smoking.  It shows you how much money you have saved by not smoking, and how many cigarettes you did not light up.  It encourages you to do other things with all of the time you have saved by not spending those five minutes puffing away.  Awards are given to you based on your performance.  The application has over 2,200 reviews (4.4/5) and almost 1,200 Google+s.

This colorful and comprehensive application encompasses statistics, health concerns, awards you trophies as reinforcement, and allows you to share on Facebook or SMS your friends to keep them updated or ask for encouragement.  The app encourages you with a real-time display of money saved, time saved by not smoking, and the number of non-smoked cigarettes.  It even has an EMERGENCY-Button that you can press to see morbid pictures or scientific articles on the problems of smoking (PRO Version Only).

This application has over 1,300 reviews (4.5/5.0) and over 2,700 Google+s.  It has a colorful UI, but not many screens that shows you the usual, however, with this app you can create a widget for your screen that shows up to-to-date information on how long it has been since you smoked, the number of cigarettes you haven’t smoked, and the money that you have saved…it is always on your display to remind you of your statistics.

This app has many screens packed with information and has received a 4.7/5.0 rating and featured in Healthline.com in their list of top quit smoking apps of 2013.  It has the usual numbers and statistics since you’ve stopped smoking, as well as games to distract you while you fight your cravings.  They have a “vibrant” Facebook community as well to offer support for every one trying to stop smoking.  This app must be installed on the phone, not SD Card, in order for the widgets to work properly.

This app is really designed nicely and has almost 3,900 reviews with a 4.5/5.0 rating, as well as over 2,800 Google+s.  It includes pretty much the same info as the other quit smoking apps, but in a professional and polished looking app.  It has the stats and figures for encouragement with a complete social networking support tied in, as well as chatting with other quitters.  Share help, tips, and tricks from others and offer your own support.  You can also install a home screen widget for instant access to your stats and the program.

We thought we would throw in an app that is geared towards the cigar smoker – it only has a 2.8/5.0 rating, but has almost 6,300 Google+s, so there are many people who seem to like the application.  It is basically a lit cigar on your display, and you can suck in on the microphone and the tip will burn, and then blow on the microphone and smoke will come out the end.  You can also hold a green button on the screen to see the smoke, for those of us that may not want to be seen blowing on our smartphone.

1. Get Rich or Die Smoking

Okay, this app has almost 4,200 reviews with a 4.7/5.0 rating.  It has extensive screens, lots of color, and is ad free!  It has a sophisticated reward system, lots of configurations to personalize it for your smoking habits, a community to chat with other quitters, and even a relapse button.  You will receive details statistics and track the positive effects on your health and you can share those achievements via SMS, email, Facebook, and other applications.  The screen widget may not work if you load the app on your SD Card.