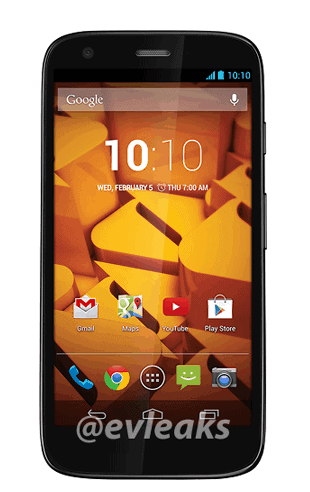 The Motorola Moto G has been a pretty surprising device. In fact, we named it the budget phone of the year. Because, well honestly, where else are you going to find a phone like this for under $200? The Moto G is by no means a high end device. It's sporting a 4.5-inch 720p LCD display, 1GB of RAM, a 2070mAh battery with 8GB or 16GB of internal storage for $179 and $199 respectively. Not to mention it just started receiving Android 4.4 – KitKat earlier this week. So far all the reviews I've seen of the Moto G have been very positive.

On Thursday, Evleaks posted a picture of a Moto G. Now there's nothing we can see on the device's press shot that makes us believe it's headed to Boost Mobile. But Evleaks did say it's heading there. And we're going to take his word for it, since he is almost always correct. I could probably count the number of times he's been wrong on one hand.

I honestly think, the Moto G would do pretty well on carriers like Boost Mobile. Since those customers are paying full price for their phones since they are not on contract. And a new phone for under $200 is much better than one for almost $300-350. Remember that Boost Mobile is a MVNO of Sprint, so we could see this hit Sprint as well as Virgin Mobile which is another Sprint MVNO. For those wondering about MVNO's like Straight Talk, and Solavei, the Moto G will work on those networks, however, you need a nano SIM card. Which Straight Talk does not carry, so you'd have to grab a SIM cutter, and cut it down to a nano SIM. Not too difficult to do, as I just did it with my T-Mobile SIM for the Moto X.