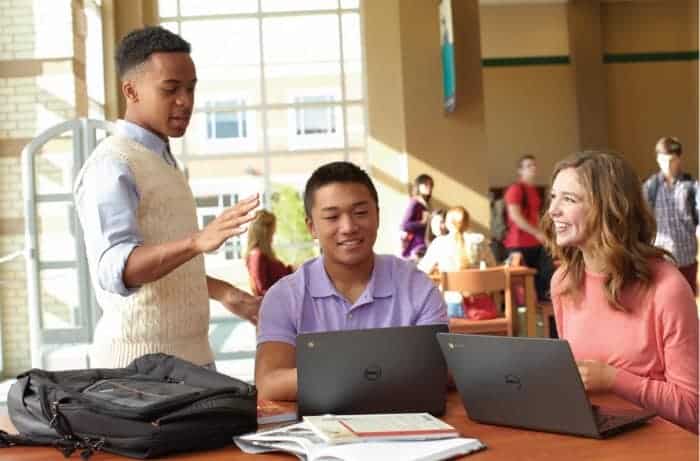 We had heard whispers that Dell were close to introducing their own Chromebook and now, it's finally here. The aptly named Chromebook 11 is focused for education use and as such isn't the flashiest Chromebook out there but, still ticks the right boxes. Aimed at use in the classroom, the Chromebook 11 from Dell is "expected" to hit below $300, Dell has yet to work out pricing for the 'book just yet. It's similar to other Chromebooks and joins Lenovo's 11.6-inch offering as Chromebooks solely for education use.

As for specs, the Chromebook 11 features a now-standard 11.6-inch 1366 x 768 panel, 4GB of RAM (with a 2GB model coming) and a dual-core 1.4 Ghz Celeron, the same Haswell CPU at the heart of the Acer C720. Where Dell's offering gets the one-up on the rest of the competition is with its battery life, with Dell estimating 10-hours of line from a single charge. When talking about the Classroom, that sort of long-lasting battery life is a real boon.

While it's strange to see Dell release a Chromebook for solely the education sector, when they're taking off for personal use it's clear that Chrome OS has a place at school. Google Drive makes it super-easy to get work done without ever having to worry about corrupted saves, or saving at all for that matter. Also, Chrome OS has the ability to control a number of other Chromebooks from one place, great for managing a whole class' worth of Chromebooks. It's not clear whether or not Dell has other plans to release mainstream Chromebooks but, as with Lenovo we expect Dell isn't looking to get on Microsoft's bad side too much.

Dell says that the Chromebook 11 will be available in both the US and the UK during the first quarter for 2014 so, expect these to hit no later than March 2014 for an expected price of under $300. If you're a Chromebook user or have experience of Chrome OS being used in the classroom leave us a comment down below or come see us on Google+!